This Autonomous Tool can Mill, Cut, and Engrave with Ease

An Italian startup has invented an autonomous router that can be used on any sheet size. The little robot does everything a traditional CNC machine can do and more,

An Italian startup has created an autonomous CNC machine that can work on any panel size. The incredibly minimalist design is touted by its inventors as “a portable robot that mills, cuts, and engraves to turn BIG ideas into tangible items with any materials and various CAD file formats.” Dubbed Goliath, the device is being marketed to ‘makers’ who want flexibility and innovation.

The product has been fully funded via Kickstarter with 37 days to go. It was aiming to raise 90, 000 but already has $636,256 in the bank. The first products for its project backers can expect to receive their Goliath in August next year. Goliath began as a thesis project for Italian designers Lorenzo, Alessandro and Davide, who used the opportunity to found the startup Springs. Springs develops products for creatives that have a user-centered approach.

Most CNC machines take up a lot of space and so are often restricted to large workshops. The goliath machine can be used anywhere where there is a power source and it is not limited by panel size. It has the ability to cut a range of materials from woods such as plywood, MDF, bamboo and solid wood to plastic sheets and thin layers of aluminum. It can handle panel thicknesses up to 35mm. Goliath can read standard CAD files such as dwg, svg, ai and its users can supervise the action via their laptop or tablet using a wireless connection.Its sensors can be recharged in less than three hours and if there is a main power outage when Goliath is in use, it will simply start where it stopped once power is restored.

When watching the videos of the hardworking bot, the question on many people's minds seems to be what stops it slipping, especially when driving over sawdust created from previous cuts. 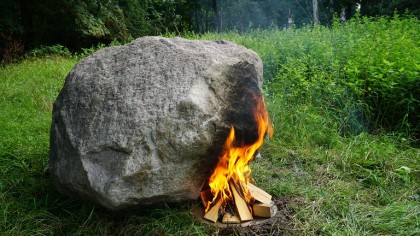 Wi-Fi Router Hidden in a Boulder is Powered by Fire

The design team answered this on the Kickstarter site, saying, “This is the magic of Goliath! We spent months looking for the right balance between the torque of the motors, the power of the spindle, wheel's dimension and material and so on. Goliath works thanks to the correct balance of these elements. If something is goes wrong, and wheels slip, the positioning systems will correct the route.”

The machine uses sensors that are set up at the beginning of each cut to ensure the robot won’t fall off the edge of a panel. It is also designed to carve out pockets or drill large holes after it has cut all the profiles. It will also cut pockets starting at one corner and move backward so there is no risk that it will fall inside the space it has carved. The product is being marketed towards craftspeople who may have limited space in their workshops or want to generate fast prototyping without the hassle of setting up a huge CNC machine each time. The accompanying video for the Kickstarter shows a furniture designer, skateboard manufacturers, and some boat makers talking about the benefits of Goliath.