This Biologist Shocked Himself With An Electric Eel For Science

Kenneth Catania from Vanderbilt University filmed himself being shocked by a small electric eel to determine what it would feel like.

The study, titled Power Transfer to a Human during an Electric Eel’s Shocking Leap, was published in the journal Current Biology and primarily look at the eels' “leaping attack,” which is a unique aspect of these extraordinary creatures. 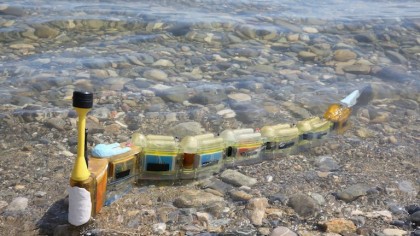 Underwater shocks from eels are widely reported and more common, though they rarely lead to death in humans they can cause respiratory or heart failure in those with weakened organs. A full-grown eel can deliver an electric charge of up to 600 volts.

With this knowledge, Catania wanted to test how and why a leaping attack was even stronger using a real eel. He acquired a relatively young 15-inch electric eel, and while clutching an ammeter device, he stuck his hand in the custom-made tank and allowed the eel to clamber up his arm, delivering an electric punch. See below.

“The voltage drop across this resistance, relative to eel height, was measured using a split metal plate with one section protruding above the water [6] and a separate section below the water. An insulator separated the plates, and voltage was measured between the plates while high-speed video was simultaneously recording at 1,000 frames per second. As the eel ascended, potential increased to 127 V,” writes Catania in the report.

It took ten tries until he was able to collect data sufficient for the study, he eventually discovered that the eel was delivering a jolt of 40 to 50 milliamperes through his arm.

He concluded that a leaping attack does inflict a more significant injury than an underwater encounter because in a leaping move the eel presses his chin against the victim to deliver the electricity directly--whereas in the water, the charge is a bit more dispersed.

Obviously the smaller the eel, the smaller the jolt. Catania chose a juvenile eel to conduct this experiment. The researcher calculated that if another person were standing in water and was shocked in the chest by a full-sized eel, the impact would be 8.5 times stronger than one delivered by a taser.

Catania is gaining significant praise from his colleagues in the science community.

Lindsay Traeger, a postdoctoral fellow, studying electric eels at the University of Wisconsin–Madison told National Geographic, “I think the electric eel brings out a child-like fascination in everyone, I find myself excited to see what Catania will come out with next.”

They aren’t eels despite their appearance. Their classification is more along the lines of a carp or catfish. These freshwater animals can stun prey, as large as a horse, using electric organs containing 6,000 electrolyte cells which store power like batteries. The eels can grow into massive predators, exceeding 2 meters in some cases.