This Budget 3D Printer Can Build Unique Shapes that Fold Themselves

A team from Carnegie Mellon University used the frustrating warping that happens with some 3D printers to create self-folding designs.

A new 3D printing process could provide a new spin on the art of elaborate paper folding and origami. A team of researchers from Carnegie Mellon University (CMU) leveraged the heat from a 3D printer to make flat items that fold themselves into elaborate shapes when heated.

The engineers used an inexpensive 3D printer and a common malfunction or mistake in 3D printing to create truly remarkable shapes -- including roses, boats and bunnies.

Lining Yao serves as assistant professor in CMU's Human-Computer Interaction Institute as well as the director of the Morphing Matter Lab. Yao explained that these objects could be a small step toward items like self-constructing furniture pieces or toys that would only need a heat gun to reach their final states.

The researchers also said the technology could be used to quickly build emergency shelters during rescue and relief operations using the sun's warmth.

In recent years, 3D printing innovations have become both more elaborate and also significantly cheaper for entry-level 3D printing. This project is no different, Yao explained. Self-folding materials cut down on overall production costs of 3D objects. This allows developers to quickly replace noncritical parts or make simple prototypes with shapes that approximate the final look. Molds for more standard shaped objects and fiberglass products could also quickly be produced.

For Yao and her team, the possibilities appear endless -- an opportunity they wanted to give to other aspiring 3D printing creators as well.

"We wanted to see how self-assembly could be made more democratic — accessible to many users," Yao said.

The team used one of the least expensive printers on the market -- FDM printers. They then made the most of one of the biggest complaints of 'cheap' printers: warpage.

"People hate warpage," Yao said. "But we've taken this disadvantage and turned it to our advantage."

FDM printers continually lay down filament of melted thermoplastics. Those materials typically have residual stress. This causes the plastics to contract and often warp as the plastics cool and relieve the stress. 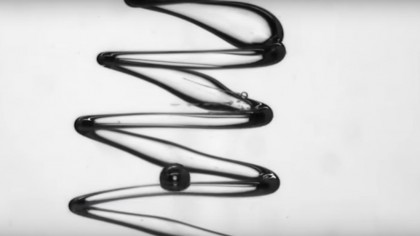 "The software is based on new curve-folding theory representing banding motions of curved area. The software based on this theory can compile any arbitrary 3-D mesh shape to an associated thermoplastic sheet in a few seconds without human intervention," said Byoungkwon An, a research affiliate in HCII.

"It's hard to imagine this being done manually," Yao said.

While other research exists into self-folding materials, those projects often involve materials that are hard to find or use processes far too sophisticated for the average 3D printer.

Yao and her team presented the research called "thermorphing" at the Conference on Human Factors in Computing Systems, which took place from April 21-26 in Montreal. The team wants to eventually upscale the project and create much larger self-folding objects.

"We believe the general algorithm and existing material systems should enable us to eventually make large, strong self-folding objects, such as chairs, boats or even satellites," said Jianzhe Gu, HCII research intern.