This Car Covered in External Airbags Will Never Get a Dent

This concept car may spell the end of dents for city drivers. The tiny car is covered in smart rubber that moves to absorb impact.

A new concept car has been released that could mean the end of dents forever. The tiny car is covered in external airbags. Japanese manufacturer, Toyoda Gosei unveiled the bizarre concept car Flesby II at the Tokyo Motor Show.

Using the concept of internal airbags and taking it a step further, the car's designers wrapped the car in soft, next-generation rubber that can absorb impact. The rubber is able to move with electric power to alter the shape of the car and LED lights are projected onto their surface to allow the car to communicate with others on the road."'We put airbags, which are mainly employed inside the car, on its exterior, such as its hood or fender, to protect the entire body," Takashi Ishikawa, managing officer of Toyoda Gosei Co, told media last week.

While the car is still firmly just a concept, Toyoda Gosei believes the bizarre car could become a reality by 2030, possibly in partnership with its part-owner Toyota. 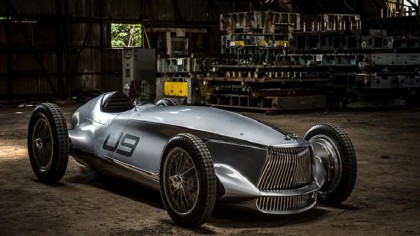 The interior of the car is just as futuristic featuring a wrap-around chair that ‘hug’ the passengers. The Flesby II is designed to be a totally city-friendly car, by making it near impossible to injure a pedestrian. The rubber can adjust to different conditions, presumably taller or short pedestrians. Reports from the motor show said this movement was accompanied by a soft breathing sound, that depending on where you were standing was either relaxing or very creepy. The concept model presented managed its shape-shifting via mechanical means but the company says they are working on a product called e-rubber that will adjust like a skin using electrical impulses.

Toyoda Gosei is a plastic and rubber manufacturer for the automotive industry, they presented a range of products at the Motor show under the themes, “Technology for Goodness―Creating Safe, Environmentally-Friendly and Comfortable Vehicles.” including a car grille specifically designed for autonomous driving. Toyodo Gosei was just one of many companies that unveiled concept cars at the show.

Honda, Lexus, Mazda, Mitsubishi, Nissan, Toyota and Subaru were among the big names making big announcements. The focus of the show was unsurprisingly electric powertrains and autonomous vehicle technology.

Japanese automakers were reportedly the most exciting to watch. Toyota revealed six new concept vehicles. These ranged from near-production cars to ridiculously futuristic concept vehicles. One of the most interesting cars they presented was the Fine Comfort Ride.

The Fine Comfort Ride is reportedly designed to compete with the benchmark of car luxury, the Mercedes-Benz S-Class. A minimalist designed powertrain has freed up a lot of space for the inside of the car and it has been decked out to satisfy even the fussiest of consumers. It features two front seats and a rear bench. That is more like a couch than a car seat. All the seats can be reconfigured to allow for different resting postures including going flat to catch a quick nap. So whether your focus is on pedestrian safety or the highest luxury, the Tokyo Motor Show provided the lot. We can’t wait to see some of these bizarre insects hit the road in the future.

Autonomous Planes - When Will They Get Flight Clearance?