The new smart window will enable visually impaired passengers to experience the view outside through their fingertips.

Most of us often neglect the scenic beauty that our mother nature allows us to experience while driving. The picturesque mountains, breathtaking waterfalls, and the surrounding natural landscape are what makes our journey pleasurable while we are in motion.

But the visually impaired amongst us might never get a chance to be a part of such a mesmerizing experience. However, Ford is trying to change that.

The Italian division of Ford teamed up with GTB Rome and a local startup Aedo, to develop a technology that will give those unfortunate passengers a way to feel the scenic beauty of nature surrounding their car windows. The company thought of developing a smart car window that will generate a haptic visual language of the scenery.

The prototype “Feel the View” smart car window consists of a special device with an outside facing camera. The device attaches to the top of the passenger window and with just a press of a button, the system takes a picture of the current view.

As the finger passes over different regions of the image, it will vibrate differently, providing a haptic feedback to the person using it.

The system also has a voice interface that uses the power of AI to identify the scene and provide audio description, to help the passengers get a context on what they are seeing.

“When the idea was at its first stage, we looked for suppliers all around the world to understand what was the best way to make it come to life” said Federico Russo, executive creative director of GTB Rome.

“As the prototype started taking shape, we realized we were giving birth to a complete new language that would give visually impaired people a new chance to visualize and experience traveling like never before,” he said. 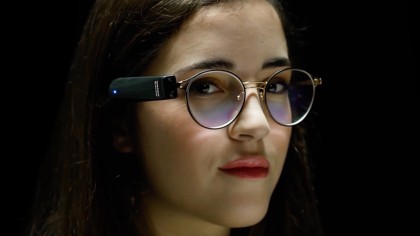 He believes that the technology is capable of being applied not just in automobiles but across multiple places.

“An innovation that today is designed to use in a car, but that tomorrow could be implemented in schools and institutions for blind people as a tool that could be used in multiple ways.”

According to several reports, there is no clear information on when this technology will be made available, and whether it will come as a standard option when purchasing a new Ford car. However, the idea of building something for the less privileged in our society is indeed a courteous gesture from the American automaker.