The Cheetah 3 Robot from MIT can climb the stairs full of debris, retain its balance when suddenly pushed and can even jump onto another surface, all without any cameras.

The new Cheetah 3 Robot by MIT has brought a revolution in the tech world because unlike its predecessors; it can easily navigate through rough terrain and staircase scattered with hurdles. Despite the challenges laden in the terrain, Cheetah 3 can efficiently retain its balance while essentially being blind.

MIT’s Cheetah robot made its debut in Boston last year in a TechCrunch Sessions Robotics. Interestingly, this is the third version of the Cheetah robot that definitely has some fascinating tricks up its sleeve.

The professor, Sangbae Kim, who is officially involved in the project is scheduled to showcase the new capabilities of Cheetah 3 at the International Conference on Intelligent Robots in the month of October in Madrid. Meanwhile, you can check out some of the tricks of this new robot in this video where the robot “Blind Climbs On Stairs.”

Sangbae Kim, the designer of Cheetah 3 and the Associate Professor of Mechanical Engineering at MIT, says, “There are many unexpected behaviors the robot should be able to handle without relying too much on vision. Vision can be noisy, slightly inaccurate, and sometimes not available, and if you rely too much on vision, your robot has to be very accurate in position and eventually will be slow. So we want the robot to rely more on tactile information. That way, it can handle unexpected obstacles while moving fast.”

Kim also has high hopes that the robot will be able to carry out some of the tasks that would normally be considered inaccessible or dangerous for human beings. Cheetah 3 is designed in such a way that it can be versatile in taking up tasks like inspection of power plants that involves walking in terrains that are packed with obstacles and curves on the ground.

There are many other difficult, dangerous and dirty tasks that are required to be done more safely. With the Cheetah 3 robots, the researchers can easily take over such tasks from the humans. 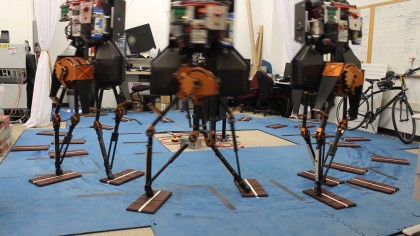 The researchers have added two new algorithms that have enabled Cheetah 3 to take up staircases or walk through terrains that are unstructured, despite being blind. The robot development team used the contact detection algorithm that helps the Cheetah 3 robots make a decision about switching their one leg from swinging up in the air to falling on the ground.

To this effect, Kim says, “If humans close our eyes and make a step, we have a mental model for where the ground might be, and can prepare for it. But we also rely on the feel of touch of the ground. We are sort of doing the same thing by combining multiple [sources of] information to determine the transition time.”

The robot, if successful with its ability to easily walk on difficult terrain, can be of immense help to carry out rescue operations during calamities. Basically, it can take over the tasks that only a few or no human can do.