This home robot that can fit in your palm has been designed with personality as a priority.

Vector the robot can answer your questions, help you complete tasks and even just hang out. The latest robot from Anki, Vector is designed to be a companionable home robot that its inventors hope will make your life both easier and more fun.

Vector is completely autonomous so instead of having to always give it instructions like Google Home or Amazon Echo, Vector can entertain itself, making it a little more like having a digital pet than a home assistant.

Following the hugely successful AnkiCosmo, Vector will ship in October for $249.99 or slightly cheaper if you back the Kickstarter campaign.

Vector likes to explore its environment, going over to new objects to check them out, but it also loves humans and can recognize faces. Despite being very high-tech, Vector doesn’t actually do that much, but that’s ok according to its inventors who have spent more time developing Vector's personality than its practicality.

"We want him to provide value and have an emotional bond with you,” says Amy Claussen, senior designer at Anki. “For adults. What is that? Okay, so that is both some entertaining activities, but largely giving some utility to make mundane tasks more fun and more enjoyable.”

Vector's creators which include, designers, engineers and animators want you to feel emotion when interacting Vector or what they called ‘“characterful interactions”. The first step in that is gendering the robot with he/him pronouns.

Vector is designed to be a dynamic part of your life, so for instance when you 'wake up' the tiny device with a simple ‘Hey, Vector’ the robot will spin around and look at you - waiting for the next command but only if it actually hears and understands you.

"What we found is that the act of me looking at you infers that I understand what you’re saying,” Claussen says. “So if the robot flips all the way around, even if he doesn’t understand, people would wait [for the robot].”

So when Vector looks at you with his full attention, you know you have the green light for the next command. If the cute little companion doesn’t understand you it will give an animated little grumble and a shake rather than a possibly frustrating ‘I’m sorry I didn’t get that’ more associated with traditional home assistants. Inversely, when Vector does the right thing it will show off a little with a celebratory shimmy.

Vector also sets himself apart by having a custom voice assistant rather than just licensing Alexa or Google Assistant. CEO Boris Sofman says that is a deliberate decision to add to Vector's character. 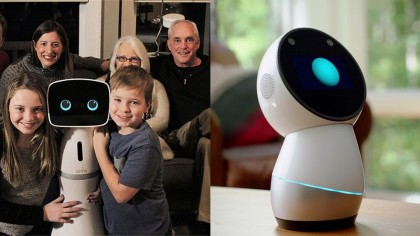 “He has a personality, he has his own quirks, his own weird behaviors, his own desires,” Sofman says. “If you flip a switch and start having an Alexa voice come out, it completely kills the fiction of that character.”

"We’re very intentionally not positioning this as a competitor to Alexa,” Sofman continues. “We have a thesis that ‘characterful’ utility is going to trump basic utility because there’s a lot of cases where that’s going to be a more enjoyable form of interaction.”

If you are willing to give Vector a chance, head over to Anki's crowdfunding page to preorder Vector now.