This robot dog developed in Japan doesn't hold back when it comes to foot hygiene.

A new Japanese robot called Shuntaro is both cute and brutally honest when it comes to foot odor. Shuntaro or Hana-chan (a play on the Japanese word for nose) is an adorable robot dog with a built-in odor detection sensor that will cause it to literally pass out if your feet don’t pass the smell test. Discretion is not this technology’s strong suit.

Developed by Japanese company, Next Technology, the mutt is diminutive at 6 inches or 15 centimeters long and will let out quite a bark if your feet even stink a little. Better yet the pooch will spray your feet with air freshener to amend the issue. 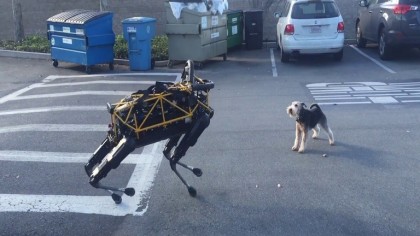 The inspiration for the cute bot comes from a Japanese man who was eager to know if he had a smelly foot problem but was too shy to ask.

“He told us his daughter had said his feet were smelly . . . But he didn’t want to know how bad the odor was because he would feel hurt, that’s why we developed this cute robot,” Next Technology employee Kimika Tsuji told Japan Times.

It’s a pretty necessary tool for Japanese culture which often encourages people to take their shoes off before entering a home. According to Japan Times, body odor can even be considered a form of harassment in the country.

Another adorable robot soon to be on the market is MiRo. A small, endearing bot whose purpose is to help the elderly. Created by the British company Consequential Robotics. MiRo is an autonomous bio-inspired bot that somewhat resembles a small, adorable donkey. Its design is based on companion animals that often serve in hospitals and convalescence homes.

“Recent research has also demonstrated that some of the benefits can also be obtained from interactions with animal-like robots. The appearance and behavior of MiRo make it an ideal platform for investigating the potential use of robots in robot-assisted therapy for both children and adults,” writes the company on their website.

MiRo can even remind elderly owners to take their medication on time, drink a cup of tea to keep them hydrated and will contact assistance if they fall.

"We're trying to reverse-engineer nature and mimic biology, so MiRo is completely autonomous," company founder Sebastian Conran explained to Wired magazine. "It can find its way around and charge itself, and doesn't need to be told what to do."

The bot is available as a software kit for developers, and a consumer version will go on sale this month for £600 or around US$800.