Designer Jan Peisert put together an impressive composition of renderings of Tesla Semi Truck, which is set to be unveiled next month.

With a targeted unveiling date of the Tesla electric truck set for November 16th, anticipation has been building.

The concept behind the Tesla truck was in some ways similar to other projects Elon Musk has created: to change the public’s, as well as the industry’s, perception of what electric vehicles are capable of. 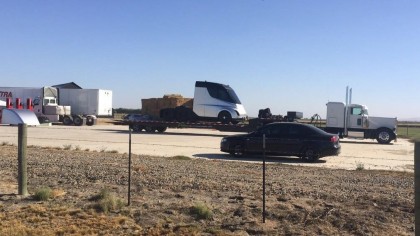 Earlier this year at an April TED talk, Musk said of the semi’s potential: “…with the Tesla Semi, we want to show that no, an electric truck actually can out-torque any diesel semi. And if you had a tug-of-war competition, the Tesla Semi will tug the diesel semi uphill.”

A group of high-resolution renderings was created by Jan Peisert. The Germany-based web designer combined an image leaked from last week with the teaser provided earlier by Musk, producing multiple images: some offer a comparison of the two, while another highlights the Tesla Semi next to its product companion truck, the hydrogen-powered electric Nikola One, set to be launched in 2021.

Unlike most renderings we typically see, the designer creates a compelling timeline for the various trucks, shifting them around, and even producing an image with an alternative configuration. The artist created a video documenting the interesting design process that went into making the renderings.

Peisert said of the two trucks:

“The design is very Tesla-like, and fits nicely into the brand’s design language.

“I think in terms of design, it can’t be too futuristic, the people need to get used to electric semis first before Tesla can go crazy on the design, maybe in the second generation. I quite like the clean look of it. Especially compared to the already modern looking Nikola One, the Tesla stands out quite nicely.”

Musk himself was impressed with the way the prototype handled when he tested it back in May:

“...it's quite bizarre, test-driving. When I was driving the test prototype for the first truck -- it's really weird because you're driving around and you're just so nimble, and you're in this giant truck.”

From roadsters and sports cars, to race cars, and now even trucks, the industry is sending us a clear message: not only are electric vehicles here to stay, but they are creating an indelible mark on the industry. Always the product impresario, Musk, still has the burden of making a case for cost and production feasibility.

The trucking industry is a completely different territory. One crucial point, for instance, is the fact that long hauls would require a network of fuel cell stations for recharging. IHS Markit truck market analyst Antti Lindstrom said of the challenges of meeting fuel demands for electric trucks:

“I don’t doubt the technology for the truck itself — that’s pretty straightforward, and it’s been used for quite a while in other vehicles,” cautiously adding, “But success is going to hinge on scaling that and creating a distribution network. It’s a do-or-die situation there.”