The innovation is aimed at solving the world’s water crisis.

The Water Abundance XPRIZE is a $1.75 million price that is awarded to the best invention that can create a feasible solution for the world’s water crisis. Surely, the price is of no small amount, but it also has some strict criteria that need to triumph first.

A competition that could end the global water crisis

There is a real need for such a device as is it is estimated that over 780 million people around the world are facing water scarcity.

Recently, the XPrize was awarded to the WEDEW project by Skysource/Skywater Alliance. The WEDEW or Wood to Energy natural resource for power promises all the right things that we want to see in a machine that can harvest water without polluting or costing too much.

In theory, WEDEW is very efficient in its game. The machine creates an environment where humid air can condense to release the water within the same.

We can even say that the technology mimics the working of a cloud. However, what makes WEDEW standout is the way it does it, as it requires no electricity, just some biomass!

The WEDEW is a culmination of two existing technologies. The first is a tech called Skywater which takes in air and condenses it to extract water from it.

The problem with this technology is that it requires quite a lot of energy to operate. The other part of the technology is something called a Biomass Gasifier.

It is a method of biomass decomposition that uses pyrolysis to vaporize the biomass. During Pyrolysis, a hot and humid condition is created, perfect to condense the hot air coming in.

Another perk of the machine is that as the pyrolysis takes place, it turns the biomass to biochar – potent organic manure that can greatly help plants to grow and flourish.

“It’s a carbon-negative technology,” said David Hertz, a California-based architect who helped lead the project. “I think the future of technologies is going to be moving to this restorative, regenerative model that actually helps to repair the damage we’ve done.”

95 competitors from 25 countries – and the true winner is humankind!

The XPrize competition was announced back in 2016, where participants from all over the world could try their hands at developing a machine that can generate fresh water. By the start of this year, only 5 contenders remained from the original count of 95.

The solution from Skysource/Skywater could produce 113 Liters to 1135 liters per day, gaining an edge over JMCC WING which presented a higher cost per liter figure. 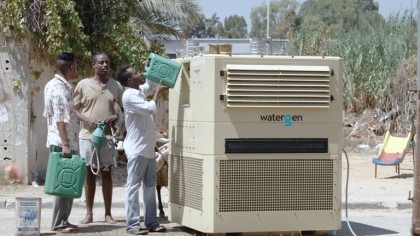 The WEDEW won US$1.5 million in prize money, and JMCC WING was awarded $150K for its efforts.

“We do a lot of first principles thinking of XPrize when we start designing these challenges,” said Zenia Tata, chief impact officer of XPrize. The team then realized that the best solution is to turn to the atmosphere that holds 12 quadrillion gallons of water.

“At any given time, it holds 12 quadrillion gallons–the number 12 with 19 zeros after it–a very, very, big number,” she added.

The XPrize is sponsored by the TATA Group and Australia’s Aid Group.