A new device on display at Makers Faire Rome 2018 leaves plenty of room for users to customize their smart home solutions and we got the interview!

The world continues to get more connected, and the Internet of Things grows rapidly grows each year. But one simple motherboard could give creative programmers the freedom to connect whatever they want, however they want.

The CM3-Home is a Raspberry Pi Compute Module 3 designed to give anyone the power to automate systems within their homes. The display was certainly turning heads at this year's Maker Faire Rome.

The CM3-Home isn't a traditional smart home device. The open source software and Raspberry Pi interface allow for extra modules to be added with ease.

But more about that later. For now, let me tell you more about the CM3-Home board. It was designed to be installed within a DIN rail switchboard. It also protects against EMI and static charges and can handle harsh environments.

An interview with the CM3-Home innovator

CM3-Home and the companion CM3-Panel came from Italian author, designer, and developer Guido Ottaviani. Ottaviani founded GUIOTT, a company where his creations and open source software can be accessed by anyone around the world. 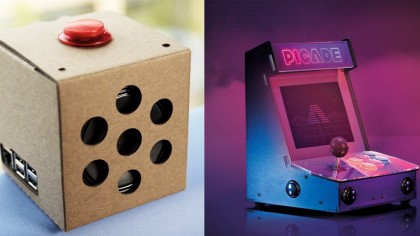 He deals with electronic design and embedded system firmware for Robotics and industrial and civil applications, as well as technical disclosure on the internet.

"The idea [for CM3-Home] came by knowing the Raspberry PI Compute Module 3 (CM3) that offers the capability to develop your own board," Ottaviani said in an exclusive interview with Interesting Engineering. "With an industrial, certified board, already populated with direct hardware interfaces, a lot of more possibilities come up compared to a standard Raspberry PI 3 with a bunch of USB adapters attached."

"The RPI 3 can be good for a maker or to develop the idea but when you need to install a real system in a real environment you need a professional board," he continued.

There's a growing need for automated technology. As more of these systems become available, the price will go lower and giving more people the opportunity to customize their own solutions.

"I guess right now there is all the technology to develop whatever you want in a reasonable price. In the moment that also IKEA came out with its Tradfri system, the domotics is for all of us, not just nerd, geeks or big manors for rich people," Ottaviani said.

"Automate home appliances will be more and more common for every environment, both domestic or industrial," he continued. "Wireless, not just WiFi but 868MHz or similar more reliable radio systems, will become more and more common on already installed houses. But they will still live together with the rock-solid wired systems for a lot of time."

9 Smart Home Devices to Help You Survive Another Lockdown