Developed by New Zea;and-based company Methven, this futuristic showerhead claims to save you a bundle on water costs without compromising your shower experience.

A good showerhead is more important than you think. We all love standing under a torrent of warm, soothing water after a long day. It's essential that the spout giving us that steaming water does the job. However, there's always a twinge of guilt after a long shower pondering. In the United States alone, showers are the third-largest point of water consumption.

One innovative showerhead could cut water consumption without ruining your shower experience.

"With water shortage, a global concern, water conservation and efficiency of water use are paramount whenever we develop new products and technologies at Methven. Rua uses 1.8 gallons per minute (gpm), reducing water consumption 30 percent compared to conventional 2.5** gpm showers," states their website.

Rua uses 0.7 gallons less than the standard showerhead found in American households. Despite this significant decrease, the creators of Rua insist that it doesn’t change how the shower feels.

Hidden nozzles generate individual jets of water that collide against precisely angled surfaces within the contours of the shower head, propelling water out of this angled channel. This then creates a fan of water that has 20 percent more spray force than a regular shower as well as twice the skin coverage for a full-bodied experience. 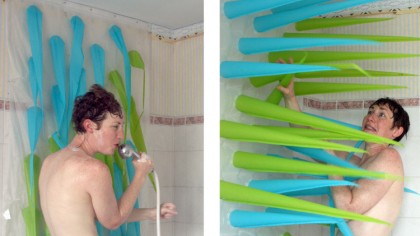 Aesthetically Rua is a sleek chrome continuous slot design, framing an inner faceplate that conceals the engine within it. It’s engineered to last for years and promises to neither discolor nor degrade over time.

Since its Kickstart debut, Rua is available for pre-order for $169, with an estimated shipping period of December 2017.

Rua isn’t the first advanced shower system out there. Nebia is a shower head that turns water into millions of droplets to create a mist of water that claims to cover ten times more surface area than a regular shower.

Much like Rua it also saves thousands of gallons of water a year, which pretty much allows Nebia to pay for itself after a year of use. It first launched on Kickstarter in 2015 and raised $3 million in only one month after its debut.

Now, fans of this water system include Apple CEO Tim Cook, who invested in the development of the product.

We want to own that space, but with a better sense of both experience and water conservancy,” said Carlos Gomez Andonaegui, a founder of Nebia, about the shower head market to the New York Times.

Next up for bathroom conservancy efforts? The Nano Membrane Toilet, which has financial backing from Microsoft head Bill Gates. The waterless toilet produces energy by using rotation to pass human waste through a membrane that separates water molecules from the excrement. The water produced by the toilet can be used to water the garden or for other household activities.

It’s especially useful in countries that don’t have access to a sewage system or clean running water and was recently debuted at the Toilet Investment Summit in Mumbai, India.

Saving the planet might just lie in the lavatory.