London-based artist Elisabeth Buecher designed inflatable shower curtain that kicks you out of the shower to stop excessive water consumption.

Shower time goes from quick to indeterminable, depending on the time of day, our mood, or perhaps even the particular brand of shower gel or shampoo we choose to use or try out. However, rarely do we ponder the amount of water that is consumed.

The issue of global shortages of freshwater has occupied serious scientific discussions since the dawn of the new millenium; however, in the last few years reports and warnings about water shortages have increased in even more alarming numbers. Often in the media, scientists and journalists lament the struggles of agricultural communities in developing or undeveloped countries, while the reality of what is happening in terms of the same issue in developed countries is largely underrepresented, leaving a gap in the conversation.

This summer in Italy, for instance, record high temperatures combined with subsequent drought brought increased demands for water, with Health Minister Beatrice Lorenzin stressing, “An eventual suspension of the supply of water in Rome could seriously compromise the level of hygiene of all the accommodation structures, restaurants and public offices. But above all, it could seriously compromise the provision of essential health services." Echoing the European Environment Agency (EEA)’s report findings on Water Stress Areas throughout Europe, Green Cross International Founding President Mikhail Gorbachev spells out the challenges very clearly: "Continuation of water consumption at 20th Century rates is no longer possible...[as politics and the economy are tied to water consumption,] we, therefore, need to rethink the goals of economic development.”

A Design With A Message

London-based artist Elisabeth Buecher, the designer of the inflatable curtains, explains the reasoning behind the design: “I looked at the environmental issue of excessive water consumption. I designed a series of water-saving shower curtains which inflate after four minutes spent under the water, taking over the space and discouraging long water-wasting showers.” With this fun, but impactful design, she hopes to bring a broader awareness to the public about issues of water consumption.

A Trend Among Artists

Buecher’s designs are part of a larger shift in the artistic community in the last decade, as more and more artists take on environmental issues, incorporating them as major parts of their work. The term Ecological Art has been coined to describe this broad movement. Diverging from Environmental Art, the aim of Ecological Artists to combine art with platform: the main purpose of the creation of their art is to have a conscious impact on environmental activism. 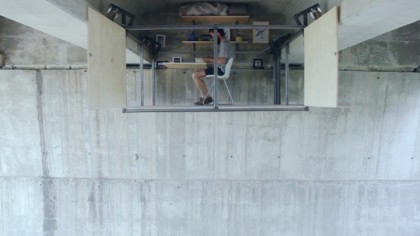