RMK have unveiled the radically designed E2 electric motorcycle concept. The unusual looking bike will have a range of 200-300 km.

Among a rash of new electric motorbikes coming on the market, Finnish company RMK is making their mark, unveiling the E2 a new electric motorcycle prototype with a hubless rear-motor wheel. The unusual looking bike has an electronically limited top speed of 160 km/h (100 mph) and is already taking pre-orders for delivery next year.

Teemu Saukko designed and patented the motor. He explained how he came about the unusual looking bike in a post on EVNerds. "The bike itself is a bastard child of a naked sportbike and wide handlebar Harley-Davidson kind of bike. It looks like its a sportbike, but it is not," the designer says.

One unusual feature of the E2 is the bold statement of having the bike's heavy gauge wiring out in the open, wrapped in protective orange sleeving. Many electric motorbikes try and hide away the details of the construction of the bike but Saukko and RMK put it right out there making a statement of the bike's construction. 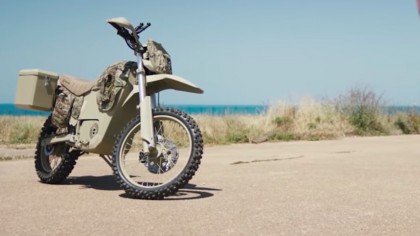 That makes the E2 one of the more expensive electric bikes available right now. The market is just beginning to full form with more big names like Harley Davidson stepping into the ring too which will likely drive prices down eventually.

RMK says they plan on increasing production levels during 2019 with another major increase in 2020. Reports suggest that Saukkio is already working on a follow up E3 model, though details remain unclear.

The electric motorbike market is rapidly growing with new models being launched all the time. Bikes range from commuter versions to super powerful sports bikes.

In good news, if an electric bike is on your birthday list there are many models at a more affordable price than the E2. The City Slicker, an electric motorcycle available in the US starts at just $1,995.

Like all emerging technologies, the first examples will always come at a higher price that will drop as the technology becomes more ubiquitous.