Romanian engineer turned artist Gabi Rizea turns rotted wood into works of art. He only began creating woodwork four years ago when he stumbled upon his talent for it.

Chainsaw art is a relatively new form of artistry that combines modern technology with the ancient art of woodcarving; the earliest chainsaw artwork goes back to the 1950s when artists like Ray Murphy used his father’s chainsaw to carve his name into a piece of wood.

These days it’s a prevalent medium, and Romanian artist Gabi Rizea is gaining notice online for his incredible chainsaw sculptures carved into old tree trunks. The chainsaw artist has managed to combine his skills as a forestry engineer with a passion for woodwork, and the results are outstanding.

He only began carving wood in 2014. After he bought a new chainsaw one day and attempted to cut a face into a woodblock, it came out so well that Rizea realized his talent for this particular medium.

Since then his ability has evolved considerably, and his most recent piece called “Galeata Care Curge” or (Water Pouring from Bucket) depicts a free-floating water pail spilling its contents out onto a dry ash stump. The piece found a home in a children’s park in Craiova, Romania. The Craiova city administration also gave him free reign to transform the old trees in many of their parks.

While his work has been attracting viral attention online, it has also pricked the interest of other cities in Romania as well. The artist has been invited to produce sculptures for parks in both Timisoara and Slatina.

“I sometimes make sketches of the designs I want to carve, but in 99% of cases, the wood just doesn’t match my ideas.”

To manifest these signature pieces, Rizea uses dead trees for his work, a task he says comes with many difficulties, lumber.

“Because I have to work with old, highly deteriorated wood, I first have to remove all the rotten parts, and sometimes, what’s left isn’t enough for my designs.” the artist said in a recent interview with CVL Press.

Sometimes working with rotten wood requires a certain level of improvisation, in the case of “Galeata Care Curge,” he realized that the center point of his design would have to be carved down due to the level of rot, to adapt this, he decided to create the undulating effect of water.

It takes him about to days to produce a piece using chainsaws, chisels and a grinder but Rizea hopes to expand his skill set by attending art school to learn the intricacies of wood carving.

There are a number of artists out there that push the limits of wood in their work. 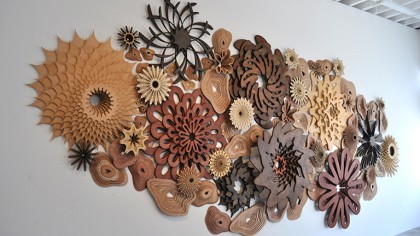 The Colectivo MANGLE partnership between Colombian artists María Paula Alvarez and Diego Fernando Alvarez, who met as woodworking students at the Fundación Escuela de Artes y Oficios (School of Arts and Crafts) in Santo Domingo, has produced incredible conceptual objects that seem to defy the constraints of hard, unmoving lumber.

Instead, their pieces seem to behave just like textile, rubber or living plants. Among their pieces are extension cords, ferns, and plywood lattices.