Researchers have developed a wallpaper that can sound an alarm if it detects heat.

Chinese researchers have developed a kind of wallpaper that can detect heat and flames, essentially turning whole rooms into fire alarms.

Researchers at the Shanghai Institute of Ceramics, Chinese Academy of Sciences, first created a type of heat and fire-resistant wallpaper using hydroxyapatite a material found in teeth and bones. The researchers found that when the material is spun into long nanowires it becomes flexible enough to be used as a base for wallpaper.

The resulting product is highly heat and fire-resistant and can help prevent the spread of flames in instances of fire. The team then took this one step further by adding thermosensitive sensors to the wallpaper made from drops of a graphene oxide ink mixture.

The graphene oxide ink mixture acts as an electrical insulator at room temperature but when temperatures rise it becomes conductive. It can then complete the circuit and sound an alarm to alert o the presence of a fire.

It will take some time for the discovery to be made into a product that is usable by consumers. The research is presented in a journal article titled “Fire Alarm Wallpaper Based on Fire-Resistant Hydroxyapatite Nanowire Inorganic Paper and Graphene Oxide Thermosensitive Sensor,” published in ACS Nano.

Fire prevention and safety is crucial to building design. Strict laws operate in most parts of the world to ensure a quick response to any possible fire.

A man died after a fire broke out at the Trump Tower in New York City last weekend. Sources close to the New York City Fire Department told media that they were no alarm sounding in the building when firefighters arrived, indicating that the building's fire alarm system may not have been working.

The fire on the 50th floor of the highrise left the occupant of the flat where the fire started dead and resulted in injuries to six firefighters. The firefighter was reportedly alerted to the fire by a building-wide alarm system in Trump Tower.

These types of alarms don’t typically have audible alarms inside the building to prevent mass evacuation in stairwells that could hinder the entrance of firefighters. The President occupies the penthouse apartment of the 5th Avenue building when he is in New York. 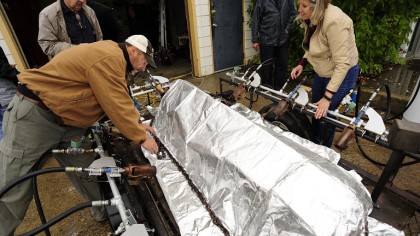 The New York Fire Department said no members of the President's family were inside the building when the blaze broke out. Fire Commissioner Daniel Nigro reported that the upper floors of the building did not have with fire sprinklers, installed.

The upper-level residential floors of the 58-story building are not equipped with fire sprinklers, Nigro said. Separately, NYC Department of Buildings Senior Deputy Press Secretary Andrew Rudansky said that records indicate that there have been no permit applications for sprinkler installation at the penthouse level of Trump Tower, where Trump resides.