Made up of silver nanowires, this transparent and stretchable loudspeaker can also function as a microphone.

We all are familiar with loudspeakers; the critical element found in almost every household in one form or the other. A typical loudspeaker has standard parts like a cone, voice coil, and a magnet.

This same combination of parts can be seen both in a cheap as well high-end loudspeakers. However, all of them essentially convert amplified electrical signals to sound that we can hear.

A group of researchers from Ulsan National Institute of Science and technology in South Korea, however, has come up with an innovative solution that might revolutionize the loudspeaker technology. The team has developed a Hybrid Nano-Membrane that emits sounds waves when fed with sound frequency electric currents.

It can also act in reverse, making it function like a microphone. The membrane developed by the researchers consists of a polymer matrix that carries orthogonally positioned silver nanowire arrays.

The result is a thin, transparent and stretchable membrane that can act as a microphone or a loudspeaker. The membrane can be easily attached to the human skin and the flexibility guarantees that it does not tear when it’s under tension.

Utilizing Silver for the Nanomembrane

The researchers opted for silver nanowires over the popular materials like graphene and carbon because of the structural advantages associated with the material at nanometer-scales. Silver nanowires also have excellent electrical properties and are capable of withstanding greater force and pressure compared to others.

Also, silver is fairly easy to hybridize into a polymer membrane, making it possible to develop nano-membranes with good optical transparency.

When the electric signals are fed into the membrane, it will act as a loudspeaker. The same nanotubes convert the vibrations resulting from the voice into electrical signals and turn the device into a microphone.

The researchers even demonstrated its versatility by sticking a thin Hybrid Nano-membrane to a human hand and played the final movement of a violin concerto of La Campanella by Niccolo Paganini.

The principle behind the production of sound in this hybrid nano-membrane is called Joule heating. The electric current causes a temperature oscillation that triggers a thermo-acoustic sound. This, in turn, moves the air around that we humans perceive as sound waves.

“The biggest breakthrough of our research is the development of ultrathin, transparent, and conductive hybrid nanomembranes with nanoscale thickness, less than 100 nanometers. These outstanding optical, electrical, and mechanical properties of nanomembranes enable the demonstration of skin-attachable and imperceptible loudspeaker and microphone”, said Hyunhyub Ko, an associate professor at UNIST and coauthor of the research. 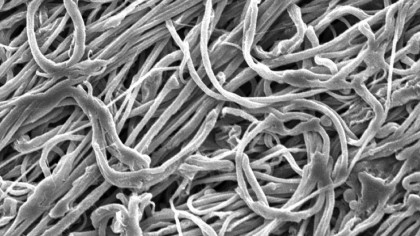 The researchers are hoping to see wide adoption of this new technology due to multiple functionalities. One model that they proposed was the use of this membrane as a personal security interface that can send signals based on user’s voice commands in microphone mode and subsequently receive notification in the speaker mode.

The team believes that their innovation would still need further reinforcement to successfully withstand the pressure, in order to make it commercially viable. The thin transparent film, however, is already stronger than polymers of the same dimensions because of the fillers used in the nanocomposites.