This Just Eat food delivery robot has been able to make its way through the blizzard during Storm Emma to deliver food to customers.

UK food delivery firm, Just Eat, has found a way to beat the tough weather conditions in the country brought on by Storm Emma, through its robot delivery vehicles.

The delivery robots have proven they can work through the snow to deliver food and they also have a light for night deliveries.

The @JustEatUK #snowbots have been doing a great job battling the elements to deliver #takeaways to hungry customers in #MiltonKeynes! The @StarshipRobots robot is able to switch from 6 wheels to 4 to help it navigate more easily through the #snow ❄️?#TheLittleRobotThatCould pic.twitter.com/eW8GXVtEOQ

"The JustEatUK snowbots have been doing a great job battling the elements to deliver takeaways to hungry customers in Milton Keynes! "The StarshipRobots robot is able to switch from 6 wheels to 4 to help it navigate more easily through the snow." Just Eat tweeted a successful delivery in Milton Keynes.

The robots were initially launched in 2016 and they are being tried in some areas around London including Greenwich and Milton Keynes. It is reported that 1,000 deliveries had taken place in London before Christmas.

If a restaurant gets an order from Just Eat, it can choose the option of requesting a robot delivery. The robot will then travel by itself to the restaurant from a local depot while the meal is being prepared.

The human operators in control centers are monitoring the robots and they can take over at any time but the robots are actually designed to drive entirely on their own.

The robot then arrives at the restaurant and a staff member places the order securely inside the robot’s cargo hold. The customer then receives a text message saying their order is on its way.

The customer will receive another text message with a code when the robot arrives outside their door. The customer can then open the cargo hold of the robot and take out their food.

To navigate their way through the streets, to avoid obstacles and be able to cross roads safely, the robots would use cameras, sensors and other technology.

The robots are designed and manufactured by Starship Technologies. The company was established by the co-founders of Skype in 2014. The robots can deliver packages and goods as well as food to consumers within a short diameter of their original location. 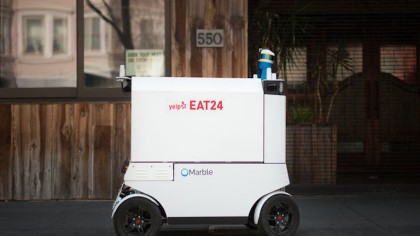 The robots can travel along the pavement on six wheels. They are to start delivering pizzas within one mile of the Domino's outlets in some German and Dutch cities. Domino's has established a Domino's Robotic Unit (DRU) to perform testing.

The company has been exploring usage of robot and drone technologies for delivery for a while. Domino’s partnered with drone company Flirtey and did its first ever drone delivery in Whangaparaoa, New Zealand.

“Robotic delivery units will complement our existing delivery methods, including cars, scooters and e-bikes, ensuring our customers can get the hottest, freshest-made pizza delivered directly to them, wherever they are," Domino’s CEO Don Meij said.

"With our growth plans over the next five to 10 years, we simply won't have enough delivery drivers if we do not look to add to our fleet through initiatives such as this." he said.

GM Begins Delivery of Its Hummer EV, but Did We Really Need This?

A World-First: Volvo Unveils Its New Vehicle Made of Fossil-Free Steel