What do you get when you cross a zeppelin with a train? Franz Kruckenberg's Schienenzeppelin, that's what. Join us as we check it out.

The Schienenzeppelin was an interesting hybrid between a train and a zeppelin designed and built during the early 1930's. In 1929, a German aircraft engineer Franz Kruckenberg decided to add an airplane engine to a train to create something that resembles the cradle of a Zeppelin airship on rails.

Franz had spent years designing Zeppelin airships prior to dreaming of the possibility of flying on rails.

Franz put his experience into practice and designed his bullet-shaped train with a difference. When it was finally built in 1930, the Schienenzeppelin was propelled using a propeller at the rear.

The entire contraption had a top speed of 230 km/h or 143 mph which set a land speed record for a gasoline-powered rail engine at the time.

The prototype Schienenzeppelin was the only one built and it was never put into active service.

Fittingly enough, this speed machine was dreamed up towards the end of the decade notorious for its fascination with speed and 'future' thinking.

The Schienenzeppelin was built in 1930 at the Hannover-Leinhausen division of the German Imperial Railway Company (Deutsche Reichsbahn). This prototype was 25.85 meters long carried on two axles with a wheelbase 19.6 meters long.

The zeppelin-come-train stood at 2.8 meters high and was fitted with an aircraft engine to the rear. The prototype railcar would be modified several times throughout its short life. The original, however, was powered by two joined BMW IV 6-cylinder gasoline aircraft engine.

The driveshaft to the propeller was raised 7 degrees from the horizontal. This was to provide downward thrust and push the railcar forward. The external fuselage was streamlined and resembled that of contemporary zeppelin airships. To save on weight the structural fuselage was also primarily made of aluminum.

It was also covered with fireproof canvas from the outside.

The railcar could seat for around 40 passengers but it was not particularly luxurious. Interior design for the Schienenzeppelin needed to be kept to a minimum to further reduce weight.

When it was unveiled large crowds were not unusual to catch a glimpse of this curious machine.

Later changes to the design included changing the engine to a single BMW VI 12-cylinder, 600 HP engine with a two-bladed propeller instead.

The Schienenzeppelin would break the world railroad speed record on the 10th May 1931, a record it would hold until 1954!

It actually reached a top speed of 230 km/h or 143 mph on the Berlin-Hamburg line between Karstädt and Dergenthin. In fact, the train still holds the land speed record for a gasoline-powered railway engine. This is primarily due to its very lightweight design and construction.

The train's designer, Kruckenberg, would later make some modifications to the train in 1932. These included redesigning the front end of the engine with a two-axle bogie and the addition of hydraulics to the transmission.

In 1934, more mods were made, this time with a Maybach GO 5 engine. Despite these modifications, the train was still not considered practical by the Deutsche Reichsbahn-Gesellschaft.

Far too dangerous for train stations

One of the main reasons for the non-adoption of the Schienenzeppelin were concerns over its safety. It was feared that an open propeller was far too dangerous in overcrowded railway stations.

Another reason being the competition that had opened up between Kruckenberg's Flugbahngesellschaft company the Deutsche Reichsbahn-Gesellschaft engines. The combination of these two issues would mean Krukenberg's innovate machine would never be put into production.

The train would also have difficulty finding an insurance company who would ensure a vehicle driven by a propeller. 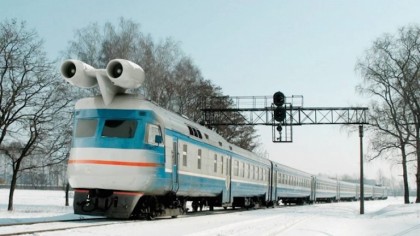 Basic economics would also doom the train. With its rear-mounted propeller, it was not clear whether it would be able to pull additional railcars. There were also concerns about the usability of the train on inclines, would the propellor become useless? Not to mention its limited passenger capacity.

Though a two-piece train couple, with propellers on both sides, was briefly tested but proved impractical.

Another nail in its coffin was objections that existing infrastructure would need to be upgraded to cope with its high speeds. The engine also had no reverse drive.

The fate of the Schienenzeppelin

In 1932, Marklin GmbH began making scale models of the futuristic train. The real train was sold to German Imperial Railway service in 1934.

With its small passenger capacity and concerns over its safety, the futuristic locomotive was decommissioned and scrapped in 1939.

The German army also needed building materials at the time leaving the possibility of its being saved a museum display out the question. The engines that powered the train were cannibalized and fitted to German light bombers.

The rest of the one-of-a-kind Schienenzeppelin was melted down for use by the German war machine. A rather ignoble end to such a fantastic machine. To this day the only evidence that this machine existed are in contemporary photographs and various toy models. Not to mention the commemorative plaque to Franz Kruckenberg at his birthplace in Uetersen.