In recent years, 3D printing has grown into an extremely viable construction opportunity. There's not only 3D printed plastic furniture but now metal and glass. Even some of the food that fills our kitchens can be 3D printed. Researchers at MIT took 3D printing houses to an entirely new level -- constructing the whole building with a 3D printer. 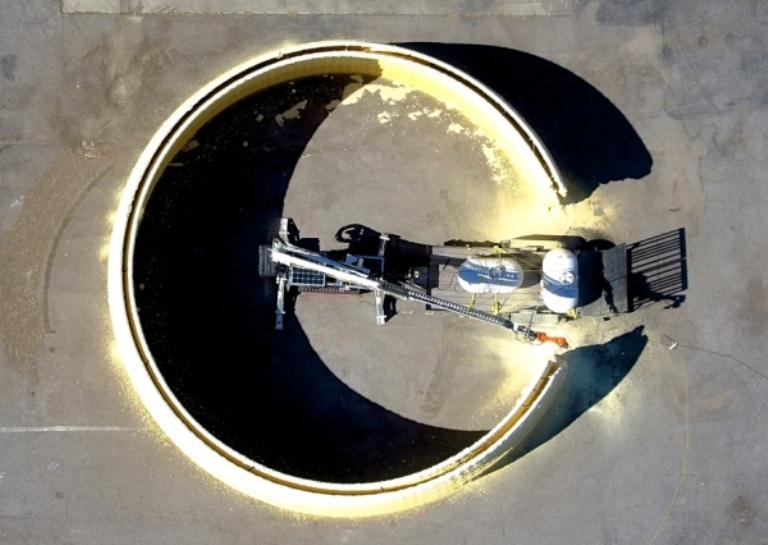 The robotic system has a smaller arm attached to a larger industrial arm [Image Source: MIT]

The system would print basic structures of the desired design. The researchers said it builds houses faster and cheaper than current construction methods. It even allows for a builder to tailor and customize the design to fit a specific location. The system can incorporate a number of different materials too. It's all up to the imagination of those programming. For mechanical engineering graduate Steven Keating, the technology of the future could be tapped into with this jumbo printer system.

"We also wanted to show that we could build something tomorrow that could be used right away," said Keating. "With this process, we can replace one of the key parts of making a building, right now. It could be integrated into a building site tomorrow."

The MIT team created the system to be self-sufficient. It has a scoop that can be used to both prep a building surface and get local materials (namely dirt) for the construction. Right now, it's largely operated with electricity. However, the team suggests replacing preexisting power needs with solar panels. This would allow the 3D printer to function in remote regions. The DCP also gives freedom to get specific. For example, a building could have curves to help a structure withstand wind or thicker walls to brace against poor weather.

"The construction industry is still mostly doing things the way it has for hundreds of years," said Keating. "The buildings are rectilinear, mostly built from single materials, put together with saws and nails."

Associate professor Neri Oxman served as the group's director for the world's largest 3D printer. For Oxman, the platform represents more than an efficient upgrade to construction practices:

"The ability to design and digitally fabricate multifunctional structures in a single build embodies a shift from the machine age to the biological age -- from considering the building as a machine to live in, made of standardized parts, to the building as an organism, which is computationally grown, additively manufactured, and possibly biologically augmented."

"So to me it's not merely a printer," said Oxman, "but an entirely new way of thinking about making, that facilitates a paradigm shift in the area of digital fabrication, but also for architectural design. ... Our system points to a future vision of digital construction that enables new possibilities on our planet and beyond."

SEE ALSO: Aerojet Rocketdyne Takes 3D Printing for Engines to the Next Level