Boyan Slat founded The Ocean Cleanup in 2013. The ocean cleaning system is now almost ready to get to work.

After years of development, the non-profit organization The Ocean Cleanup will begin the process of installing its plastic capturing device in the Pacific Ocean this week. Founded by university drop-out Boyan Slat, The Ocean Cleanup has designed and created a unique system that will take the first steps to ridding the oceans of floating plastic.

The system uses large floating tubes of durable plastic, that sit on the ocean's surface, held in place by floating anchors. The u-shaped floating barrier is designed to catch the plastic, which is then collected.

A strong nylon screen, attached underneath, will catch some of the plastic below the surface but is designed in a way so to not snag marine life. The system will now start a long slow process of install.

First, a section of the floating tube will be towed out of the San Francisco Bay, along the coast of the Farallon Islands. This initial stage tests the tubes ability to be towed.

Next, the small section will be brought back, attached to the larger section to form 2,000 feet of piping. The assembled system will be taken 200 miles offshore for a final test to ensure everything is working as it should. 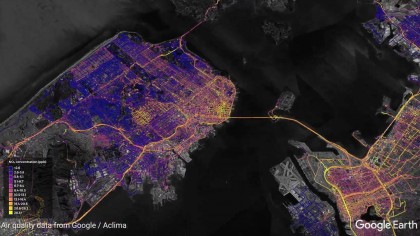 Because this test zone isn’t in a plastic accumulation zone, not much waste will be collected but how the system behaves in open water will be monitored. Once the all clear is given, the whole system will be towed out to the Pacific Garbage Patch, a journey that will take three weeks.

By late Autumn a shipment of plastic will be returned for recycling. Some of the matter may be used to create consumer goods.

Large brands like Adidas have already started to use some returned ocean plastic when they recognized the consumer appeal. The Ocean Cleanup project was in part started when then 18-year old Slat outlined his vision for reducing garbage in oceans in a TEDtalk.

The idea was met with some skepticism from experts, but undeterred Slat left university to create the organization and managed to raise $2.2 million in a crowdfunding campaign.

Salesforce CEO Marc Benioff came on board and bought with him millions more to fund research and development. Slat has an ambitious outlook and believes that in order to tackle the huge problem of plastic pollution you have to think big.

“I think very often problems are so big, people approach problems from the bottom up: ‘If only I do this little bit, then hopefully there will be some sort of snowball effect that will be bigger and bigger,'” he says.

“I’m much more in favor of the top-down approach to problem-solving. Really ask, if the problem is this big, how do you get to 100%? Then knowing what it takes to get to 100%, work your way back. Well, what do I have to do now?”

Input of plastic still a problem

While the Ocean Cleanup project is an integral part of tackling the plastic problem, it isn’t doing anything to stop the flow of plastic into the ocean. “Cleanups play an essential role in dealing with the symptoms of ocean plastics pollution, but they do not address the causes,” says Sander De Fruyt, New Plastics Economy lead for the Ellen MacArthur Foundation, an organization that works on helping create closed-loop systems for plastic.

“They cannot keep pace with the rising tide of plastic pollution. To tackle the plastic pollution crisis, there is an urgent need to rethink the way we make, use, and reuse plastics. This will require innovators, industry, and governments to collaborate and develop solutions that prevent plastic from becoming waste in the first place.”