This Honeycomb-Like Structure Can Cool An Entire Building Without Electricity

Created by Ant Studio, these honeycomb-like structures are a nod to ancient cooling techniques.

Architecture firm Ant Studio is looking to the past to build eco-friendly air conditioners for the steamy climate of New Delhi. They partnered with Indian firm DEKI Electronics to find an artistic and cheap solution for the blistering heat experienced by DEKI employees in their factories.

"As an architect, I wanted to find a solution that is ecological and artistic, and at the same time evolves traditional craft methods," Monish Siripurapu, founder of Ant Studio told Arch Daily.

“I believe this experiment worked quite well functionally. Findings from this attempt opened up a lot more possibilities where we can integrate this technique with forms that could redefine the way we look at cooling systems, a necessary yet ignored component of a building’s functionality. Every installation could be treated as an art piece,” Siripurapu stated.

“The circular profile can be changed into an artistic interpretation while the falling waters lend a comforting ambiance. This, intermingled with the sensuous petrichor from the earthen cylinders, could allow for it to work in any environment with the slightest of breeze.”

Before the advent of air conditioners, societies in hotter climates had to figure out a way to stay cool. In ancient Egypt, moistened reeds were hung in windows, and the water that evaporated from them would cool the air blowing through. 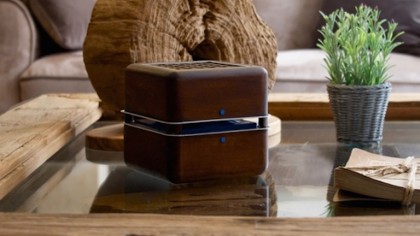 Eco-friendly Wooden Cube will Cool Your Room Using Only Ice

So how does the DEKI air conditioner work? In a design inspired by the previous ancient attempts at cooling, the architects customized the size of the conical components which were modified with CFD analysis.

Recycled room temperature water from the factory is poured into the structure in a fountain like flow; it runs down the surface of the cylinders which cools the hot air passing through the many terracotta cones, it’s enough to wet the cones only twice a day.

The terracotta is considered a heat exchange medium, which absorbs the water which seeps to the outer surface to evaporate and blow through the holes as cold air.

Ant Studio hopes to replicate this design in other factories throughout India.

“There are many factories throughout the country that face a similar issue, and this is a solution that can be easily adopted, and a widespread multiplication of this concept may even assist the local potters, said Siripurapu.