This Hubless Folding Bike Can Easily Fit In Your Backpack

The Sada folding bike has no spokes and can fold down in seconds to the size of a backpack. The bike is designed for commuters and city dwellers who do a combination commute of motorized transport and cycling.

Imagine if you could carry around your bike with the same ease as carrying an umbrella. Dream no further. Sada Bike has invented a bike frame that can fold down into the size of a backpack. Folding bikes are not a new idea but this revolutionary design takes the portability and practicality of the concept to the next level.

The compact bike can be folded down in a single movement and its 26-inch wheels can attach neatly to the frame so the whole thing can be carried on your back with ease.

The bike is still in prototype mode, but its design team is currently seeking funding to refine the product. Unlike most bikes, the wheel doesn’t get its strength from tensioned spokes, the Sada achieves this with an ultra strong rim. This concession for portability does mean the bike is a slightly inefficient ride in its current form, but its designers are confident the bike's weight and function will steadily increase as they refine their ideas.

The bike is designed for commuters and city dwellers who do a combination commute of motorized transport and cycling. Whether you partially drive or spend time on a train, once you get to your destination, your bike unfolds in seconds and you are ready to tackle the city streets. The bike's unusual rimless wheel is a big leap for transport generally.

The bikes inventor Gianluca Sada has done extensive testing on the frame and wheels of the bike to analyze their behavior during the application of loads (interference and FEM analysis). The technology could have applications in other modes of small load transport.

Folding bikes were reportedly invented for use in the military. It is widely assumed that Mikael Pedersen developed the first folding bike in 1900 for the British Army. The bike weighed almost 7 kg and had 24-inch wheels. The bike featured a rifle rack and was used in the Second Boer War.

Folding bikes were further developed for the military that could withstand being dropped from a parachute. The British WWII Airborne BSA was used by the British army from 1942-1945. It was deployed with airborne troops, Commandos, and some infantry regiments. The folding bikes were also used as a quick mode of transport on large military bases.

Gianluca Sada trained as an engineer and actually registered the trademark for the SADA bike in 2010. The bike has since undergone a long testing process to get to its form today. One key feature of the bike is its ability to fold down into a backpack that still allows room for the transportation of necessary daily items. Whilst many other folding bikes come with carrying bags or straps, this feature turns the bike into a usable accessory. 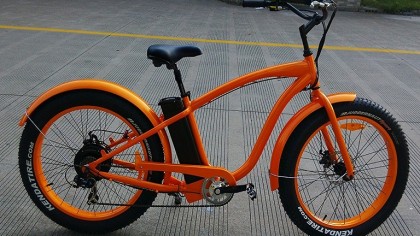 Since the release of the prototype, Sada has been overwhelmed by requests. He made a statement on his website saying “Thank you for your strong interest in Sada Bike, we apologize for the lack of an answer, but you are really so many and we can not keep up with all your requests. The project Sada Bike proceeds with better results and will soon be distributed throughout the world. Stay tuned for new updates.” We certainly will be!