The Quechua, a group of people indigenous to the Andes region of Peru, come together every year to rebuild a suspension bridge entirely by hand.

On most of the South American continent, Spanish is the language which unites the main economic and political activities. However, indigenous languages and customs are also very strong and vibrant. One such example of this is the annual Q’eswachaka bridge festival, which happens every year in the second week of June.

The festival lasts three days and during this time members of the local indigenous community—Quechua—work with impressive unity and coordination. 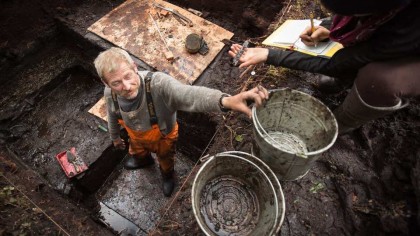 The rebuilding serves two purposes: to honor the symbolic link between the past and present that unites Quechua, and also to honor the Andean gods. Most symbolically, the community unites to tear down the bridge from the previous year as well as rebuild the bridge. All of this takes place in only three days. Also interesting is that the rebuilding efforts are done by members coming from four different Quechua communities: Chaupibanda, Choccayhua, Ccollana Quehue and Huinchiri.

To complete the process of rebuilding the 38-meter bridge, a series of rituals that honor Quechua heritage are followed. First, after asking the Pachamama, an Andean goddess representing an Earth mother, for protection, the rope, or q’oya, is woven together from a local grass, ichu, by Quechua young girls and women. The chakarauwaq, or engineers, then construct the braided grass into ropes, take apart the old bridge, and begin the important task of weaving from both sides of the river.

The bridge connects the Apurimac River, and historians from the US-based Smithsonian National Museum of the American Indian believe that the bridge—the only example of a suspension bridge representing a pre-Hispanic aesthetic in the entire Andes region—dates back to pre-Colonial times in the 14th century. Corroborating this information, Allie Plata of the Smithsonian Museum, explains the significance of bridges from this time period:

“Inka bridges have three common design characteristics: braided cables of natural fiber form the floor and handrails, stone abutments anchor the cables on either side of the bridge, and vertical ties run between the main cables and handrails. If you look at modern bridges and compare them to the structure of the Q’eswachaka, the Inka bridge differs in that the main cables used to create the bridges not only support them, but also serve as the walkway.”

Finally, in an effort to honor tribal leadership, the last of the ropes are bound together by two master builders and thanks are offered to Apu Q’eswachaka, representing the mountain spirits. Eleuterio Ccallo Tapia, one of the two master builders along with Victoriano Arizapana, said of the sacred bridge-building ceremony: “According to our grandfathers, this bridge was built during the time of the Inkas 600 years ago, and on it they walked their llamas and alpacas carrying their produce.”

For those interested in seeing the activities live, there is a road from the central Peruvian city of Cusco that carries visitors to the site.