This Incredible Device Can Turn Air Pollution into Usable Ink

A new device is extracting air pollution and turning into usable ink. Pollution is becoming an escalating problem. For over 150 years, fossil fuels have been an integral part of human development. One of the major issues that come with it, however, is the soot it produces. Research has proven soot to be a major cause of premature deaths around the world. In America alone, over 20,000 premature deaths were caused by particle exposure. Soot also is the main cause of over 300,000 asthma attacks and 2 million lost workdays due to respiratory problems. However, researchers are developing an incredible device which turns air pollution into ink. Once it passes government testing, the technology will be used to take the air pollution out of exhausts. 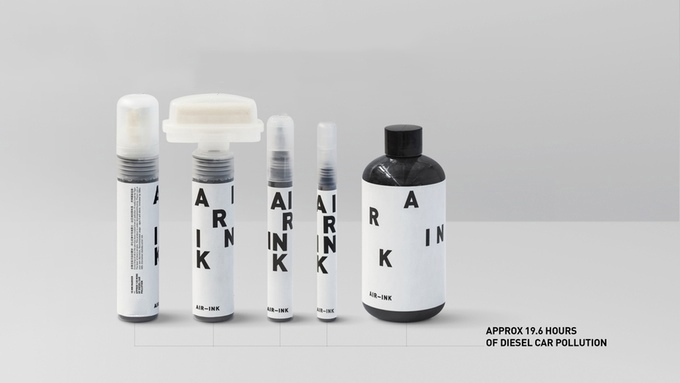 A few years ago, former MIT student, Anirudh Sharma, was appalled when he returned back to India. Sharma grew up there and knew the pollution was bad, though he could not believe the extent it grew to become when he returned.

“It was a very simple observation — I feel like anybody can see it," Sharma says, commenting on the effects of the pollution in his home country. "Your clothes get dirtier much faster, you can see this pigmentation happening [on] buildings, to your clothes, to everywhere around you."

His solution was to build a device which can extract the black sludge from the air and repurpose it. The device, called the KAALINK  is a mechanism that retrofits to an exhaust pipe and extracts pollution from the air. The researchers who developed the mechanism at Graviky Labs claim it removes 95% of the particular matter pollution without inducing back-pressure.

Historically, one of the most common ink types was black carbon ink. It is made from extremely fine particles of the soot of burnt oils or resins in a solution of glue or gum arabic. Although there are other ways of producing black ink, it is still one of the cheapest methods. The device captures the already emitted soot vehicles generate.

It takes just 45 minutes worth of vehicular emissions captured by Kaalink to produce 1 fluid ounce of ink––enough to fill one of the pens being offered through this Kickstarter campaign.

Currently, the project has raised more than US 35,000 dollars on Kickstarter, more than double their original goal of 14,000 dollars.

The claims are bold, however, the device is currently undergoing certification and the lab is hosting private demonstrations.

Combustion engines are designed to be efficient, however, inevitably the engine will generate pollution. Incomplete combustion generates the fine black particles which soot is predominantly composed of. Soot particles are incredibly small, typically measuring just 2.5 micrometers or smaller in diameter; Thinner than dust or mold, it can travel deep into the lungs where it can become lodged and cause serious damage.

The idea first sprouted in 2013 at the Fluid Interfaces Group, MIT Media Lab. Since its initial development, it has undergone many refinements to improve the capture technology. Air travels through a series of channels which scrub the particles out of the exhaust. The soot becomes trapped between plates where it can be later extracted.

The system relies on a series of channels which redirects air down smaller passages. As the pipes converge, the channels scrub the small particles that measure 1/30th the diameter of a human hair. However, the device does not affect the performance of the engine. Advanced sensors monitor and gauge the flow and performance of the device. If backpressure is detected, air is redirected through electronically actuated vents. Kaalink, the system the device relies on, can be retrofitted to virtually any exhaust pipe to capture the outgoing pollutants.

The unit automatically turns on when an engine is activated and gases start flowing through the exhaust. This activates the flow and thermo sensor, which, in turn, engages a mechatronic capture system. All fine particle matter is then captured within the walls of the unit; however, gases are allowed to pass through, leaving the engine unaffected.  When the lights on the exterior of the unit turn from blue to red, the catchment is full. 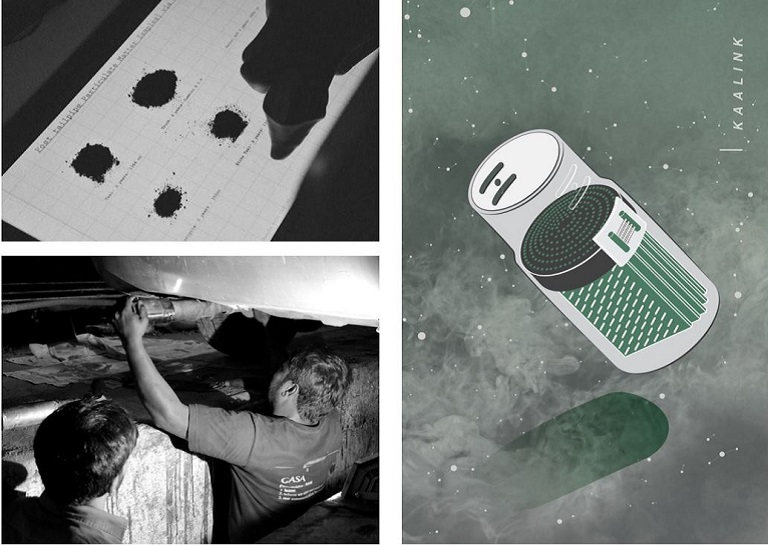 Converting the soot into ink

Unfortunately, soot contains many impurities and carcinogens. Micro fragments from the engine break off and accumulate in the soot. Similarly, impurities in the fuel create toxic compounds which have to be carefully extracted from the soot before it can be converted into ink.

The captured pollution is taken back to a lab where it undergoes a process that removes trace of heavy metals and carcinogens. From there, the refined soot goes through various industrial processes to manufacture the final product; inks and paint.

The captured pollution contains toxic impurities like re-entrant dust, heavy metals, oils, VOCs etc. This is purified by proprietary chemical processes beginning with gravity based separation for high-mass particles, to comminution and catalysed activation. Finally the recovered soot is taken through a grinding process to bring to a consistent particle size, as good as an ink pigment.

Gaviky Labs goes on to explain.

Though the technology is not a  permanent solution, it is a superb effort of resourcefulness to reduce emissions.  Before full-scale development, the device will have to prove it will not clog and potentially damage cars, or cause engines to fail at critical times. Furthermore, the collection methods must be convenient to the owner, yet still practical and profitable for the company involved.

There are still many hurdles for the technology to bloom into the magnificent device it claims to be. Despite the challenges yet to be overcome, the technology is proving to be a promising solution. When and if it reaches a scalable level, it could perhaps be a fantastic method to help reduce humanities' impact on the world.

SEE ALSO: This Japanese Invention Can Recycle Plastic into Oil