These sleek three-story units are an attempt to take back city design from cars and give them back to the people.

Finding housing in a major city can be an absolute nightmare, but one firm wants to make the process easier by building smaller housing options.

Metropolitan areas like London, Manhattan, and Nashville have all struggled with adding more housing; most of these cities seem to be running out of room. What housing is available is certainly not affordable for most.

Enter the design firm Casagrande Laboratory, a company which believes the solution can be found in a single parking space. The Helsinki-based firm specializes in tiny homes for unique areas, a definite spin on the 'tiny house trend' still enticing millions around the world. However, rather than use a microhouse as an escape from civilization and disconnecting from the grid, Casagrande Laboratory's Tikku project places homeowners in the middle of the urban environments that they love. (Tikku, by the way, is Finnish for "stick.")

The super-skinny home measures just 16 feet (4.8 meters) long by 8 feet (2.4 meters) wide. Rather than build out, the Tikku's layout builds up. Each home features three stories. The first story includes an office; the second story has a bedroom; the third story tops the home off with a greenhouse.

Each home is optimized to be eco-friendly. Solar panels power the house. The structure is made from cross-laminated timber -- a sturdy wood engineered to be five times lighter than concrete. 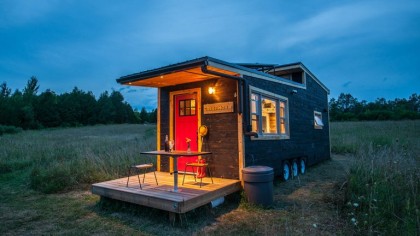 This Could be the Greenest Tiny House Yet

Architect Marco Casagrande said he wanted to reclaim cities to be of more use to humans than to cars.

"The city is not designed because of humans–it’s designed because of cars,” he said in an interview with Fast Company. "All the streets in cityscapes are based on car dimensions. This I found a little bit strange. We have all this talk about the density of cars getting less and less in cities, and at the same time, we are talking about people moving into cities . . . but we don’t have space to build. Nobody has been questioning car parking spaces. They are everywhere. So this talk about no land to build in cities is nonsense: It’s everywhere, but it’s just for cars."

The Tikku project originally debuted at Helsinki Design Week in September. Since then, the firm has received several orders for homes. A three-story unit costs just $40,000 -- a much more cost alternative solution to a high-rise apartment which could ultimately cost more for an equal amount of space.

Other creative spaces in unique places

Casagrande Laboratory certainly has experience with putting functional homes in seemingly improbable spaces. In 2014, the design firm debuted their Ultra-Ruin project. They nested a sleek, single-family housing unit in the middle of a Taiwanese jungle. The Ultra-Ruin home combined the sleek elegance of modernism and yet still melded it with the 'ancient' environment around it.

"Encompassing two levels, Ultra-Ruin is a free-flowing sequence of serene spaces that engender spiritual reflection while mediating the contrast between inside and outside, deftly allowing one to assert itself within the other," wrote Francois-Luc Giraldeau in an issue of MARK Magazine regarding the project. "Evoking the building’s lush setting are several local timbers, such as mahogany, which was used to construct the walkway that leads to the entrance. Other materials, however, provide a crisp, contemporary counterpoint to nature and to the project’s rustic appeal."