The race to build a working cloaking device could have a new contender thanks to the humble leafhopper. A research team at Penn State University has found that the sweat of this little creature has some curious optical properties.

Microparticles sweated out by leafhopper insects could provide scientists and engineers with an answer to producing a cloaking device. At least that's what a team of engineers at Penn State University believe.

They also have the handy side-effect of providing camouflage for the little critters from predators, as it turns out.

The secretions double as camouflage

The team found that the secreted brochosomes seem to alter the wavelengths of light enough to act as a biological cloaking device. 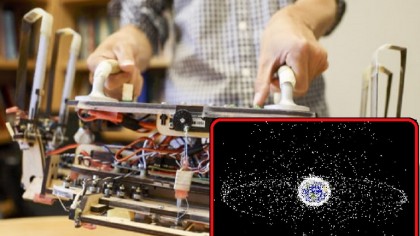 Scientists have long known that leafhoppers extrude these microparticles and wipe them on their wings. But what was not previously understood before was that the secretions allow the leafhoppers and their eggs blend to their backgrounds. This rendered the adults and eggs practically invisible to their predators, like the ladybird beetle.

The secret of the microparticles seems to be their physical structure. Each soccer ball like microscale granule is covered in nanoscale indentations, These indentations are just the right size to absorb light, at least in a particular range of the spectrum.

The team would go onto to attempt to create them artificially.

"We knew our synthetic particles might be interesting optically because of their structure," explains Tak-Sing Wong for Penn State in a statement. He is the assistant professor of mechanical engineering Wormely Family Early Career Professor in Engineering at Penn State.

"We didn't know, until my former postdoc and lead author of the study Shikuan Yang brought it up in a group meeting, that the leafhopper made these non-sticky coatings with a natural structure very similar to our synthetic ones. That led us to wonder how the leafhopper used these particles in nature."

The pits are the secret

The pits of the particles were found to be very close to the wavelength of light. These pits allowed the particles to absorb light and allow the insects to become near-invisible. The particles effectively act like a metamaterial, the type of material used in cloaking devices.

The problem is that in the field, these leafhoppers produce very little of this product, and it is very hard to collect," Wong said. "But we had already produced large quantities of these structures in the lab, enough to put inside a machine to look at their optical properties."

The research team went to publish a study attempting to synthesize the secretions in Nature Communications. The team of engineers managed to design a synthetic material that mimicked the properties of the leafhopper's brochosomes. To do this they developed a five-step process that involved something called electrochemical deposition.

The team went on to test the artificial brochosomes by putting them on leaves and watching them with simulated insect vision. Interestingly enough the synthetic particles captured about 99% of light across the spectrum from UV to near infrared. They effectively blended into the background.

Of course, camouflage is not exactly rare in nature, but there are very few examples of natural anti-reflective coatings like these. Moth eyes are, however, a notable exception. Moth eyes have anti-reflective nanostructures that prevent light from reflecting off them at night. This helps them 'hide' at night from nocturnal predators.

Right tools for the job

The synthesizing process should be able to be scaled up. Further, the synthetic brochosomes could be made, theoretically, from various different materials. This could include metals like gold or silver to compounds like manganese oxide. The researchers believe each material would have its own purpose and applications besides cloaking devices.

"For example, manganese oxide is a very popular material used in supercapacitors and batteries. Because of its high surface area, this particle could make a good battery electrode and allow a higher rate of chemical reaction to take place," explained Tak-Sing Wong.

Other uses the team suggested included an anti-reflective coating for sensors or cameras. It might also be particularly useful in telescopes. These devices would benefit from reduced light reflection affecting the signal-to-noise ratio. It could also have applications in solar cells to increase light capture at different wavelengths and angles.

Wong explains that this is a "fundamental study". "In the future, we may try to extend the structure to longer wavelengths. If we made the structure a little larger, could it absorb longer electromagnetic waves such as mid-infrared and open up further applications in sensing and energy harvesting?"

Could they be used to make a cloaking device?

As it turns out the particles are a product of the endless dance of predator and prey in nature. As impressive as the properties of these microparticles are they are 'tuned' to the intimate relationship between the leafhopper and its predators. Especially the specific way in which the ladybird beetle can see.

It is unlikely that any practical one-size-fits-all cloaking device will come directly from the team's work but it's an interesting avenue to explore. The structure of these natural metamaterials and further experimentation in their synthesis could yield something very interesting in the future.

Whatever the practical applications of this discovery only the future will tell. But biomimicry like this could be an interesting avenue to explore nonetheless. Who knows, one day it may lead to a real-life biologically inspired cloaking device.

9 Smart Home Devices to Help You Survive Another Lockdown