Cubetto teaches children ages three and up the many wonders of coding. In doing so, the toy equips them with a strong foundation for computer programming.

London-based Primo Toys, a graduate of the PCH Highway 1 accelerator, has once more launched on Kickstarter its Montessori approved educational toy: the Cubetto. The Cubetto is a toy designed to teach computer programming to children aged three and older.

Using a programming language children can touch, Cubetto teaches kids coding without the use of a screen. The toy company describes Cubetto as “a friendly wooden robot that loves to go on epic coding adventures.”

Every Cubetto playset is equipped with the tools children need to begin their coding journey including a Cubetto, an interface board, 16 blocks, a world map and two storybooks (a manual and the story of Cubetto’s first day).

Each block in the Cubetto playset is created to be a programming language command such as forward and right or left. Children place the blocks on the interface board as if they are writing a program that moves the robot around.

A toy that is fun and inclusive

Cubetto is designed to be gender ­neutral and easy to use for all children. In addition to stimulating their critical thinking and creativity, the toy provides an equal and inclusive learning environment that is fun and entertaining.

Cubetto, today, is used by more than 40,000 educators and parents in over 100 countries around the world. The toy’s appeal stems from the fact that schools today are teaching computing to children as early as five years old. Cubetto equips kids with a strong foundation for learning coding.

“Learning to program in early years is essential, but it should also be fun, playful and age appropriate.”

The original Cubetto was first introduced in a 2013 Kickstarter campaign and featured a do it yourself kit for older kids. Primo Toys then launched a successful second campaign in March 2016.

Speaking about the Cubetto series, Primo Toys’ CEO Filippo Yacob has said: “Learning to program in early years is essential, but it should also be fun, playful and age appropriate.”

“Our mission is to help children develop and realize their full creative potential. Cubetto is an open­ended toy that makes learning computer programming fun and easy to grasp. We’re proud to offer children ages three and up an inclusive, interactive playset that teaches them the basic concepts of programming before they learn to read or write."

A toy with high profile investors

The company has the support of Randi Zuckerberg and Arduino co­founder Massimo Banzi who have both invested in Cubetto. 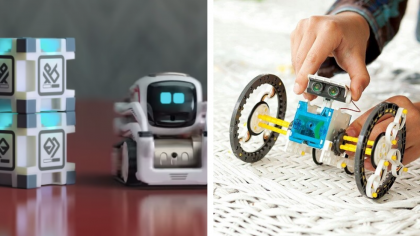 “When I think about backing a product or a company, I ask myself, ‘Would I want this product in my own home?’ and ‘Would I give this to my kids?’” said Randi Zuckerberg.

“What I love most about Cubetto is that it will give girls and boys all over the world the opportunity to learn the basic building blocks of coding, without being glued to a computer screen. As a mom, that’s my dream,” he added.