This is How Exercise May Protect Against Alzheimer's

Exercise has many benefits and has also been found to aid in the prevention of many health-related issues such as high blood pressure. Now, new research is exploring how it could also protect against memory loss and even Alzheimer's.

We all know that exercise releases endorphins but that is not the only hormone it helps with. According to the researchers it also releases irisin.

This hormone, discovered only a few years ago, was at first believed to play a role simply in energy metabolism. However, newer research suggested irisin may have been responsible for promoting neuronal growth in the brain's hippocampus.

The hippocampus, an organ located within the brain's medial temporal lobe, is associated with learning and memory, particularly long-term memory. As such, the scientists posited that it is the effects that exercise-released irisin has on this organ that explain the role of exercise in deterring memory loss.

"This raised the possibility that irisin may help explain why physical activity improves memory and seems to play a protective role in brain disorders such as Alzheimer's disease" said study lead Ottavio Arancio, MD, PhD, and a researcher at Columbia University's Vagelos College of Physicians and Surgeons and Taub Institute for Research on Alzheimer's Disease and the Aging Brain.

To study their hypothesis, the scientists decided to look at the levels of irisin in Alzheimer's patients. What they found was that they had reduced hippocampal levels of the hormone. 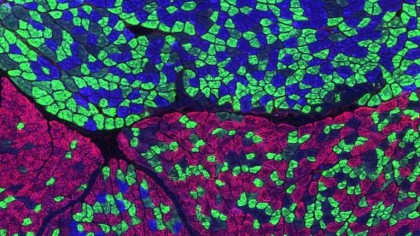 So, the researchers decided to explore irisin's effects on mice test subjects. Low and behold, it was determined that irisin in mice protected the brain's synapses and memory capabilities.

When irisin was disabled both those areas were weakened. When it was boosted, both improved.

Furthermore, the researchers gave mice infusions of beta amyloid, the protein responsible for robbing Alzheimer's patients of their memory. Impressively, the mice who swam nearly every day did not have any memory loss despite the infusions.

However, when they blocked irisin, swimming had no positive effects whatsoever.

Arancio and his team are now looking for pharmaceutical compounds that can either increase levels of irisin or mimic its effects in order to treat or prevent dementia.

"In the meantime, I would certainly encourage everyone to exercise, to promote brain function and overall health," he said. "But that's not possible for many people, especially those with age-related conditions like heart disease, arthritis, or dementia. For those individuals, there's a particular need for drugs that can mimic the effects of irisin and protect synapses and prevent cognitive decline.

The study was published in Nature Medicine.

How Long We May Have to Wear Masks

This Is How Aerodynamics Works in Vehicles

This is How Boston Dynamics' Robots Learned to Dance