This is How to Start Your Car in the Freezing Cold

If you are having an issue starting your car in the cold, you might want to see if it is any of these common issues.

When winter is coming it can only mean one of two things. It's close to Christmas and you're about to spend a fortune or you about to be plagued with starting a car in cold weather.

In either case, you are in for a headache. Better pop down the pharmacist.

When a car is exposed to cold and damp weather it can lead to some problems that may mean it won't be able to start. Older cars, especially those with carburetors, are most prone to this problem.

See Also: 10 Of The Best YouTube Channels For Keeping Your Car In Fit Condition

More modern cars with fuel injectors tend to be less likely to have any issues. But that's not to say they can't suffer from some common issues when the air is damp and temperature drops.

But despite this, there are some common myths about why cars have problems starting when the temperature drops.

And in case you're wondering, electrical vehicles and hybrids are not immune from the cold.

Why is my car hard to start when it's cold?

Cold and damp weather tends to result in some common issues with cars of any age.

This is usually one of the main culprits. According to many recovery service providers, like the RAC in the UK, it by far the most common reason for callouts in colder months.

The main reason for this is that colder temperatures have a direct effect on the car battery's chemical reaction. Most batteries are rated at 77 degrees Fahrenheit (25 degrees Celsius).

Below this, the batteries power output begins to drop dramatically. For example, at -15 degrees Celsius, a fully charged lead-acid battery will have only about half of its rated amp-hour capacity.

Symptoms of a battery problem

Generally speaking, if you can hear a faint whining noise when you try to turn the engine over its probably the battery. This is especially the case if the starter motor doesn't turn over.

This usually means the battery is flat (totally depleted), or the cables to the battery have come loose. In extreme cases, you might not hear anything at all.

Other things to look for include the lights on your dashboard completely failing to illuminate. Your car might even refuse to open when you try to activate its central locking using your car fob.

Fixes for a battery problem

Prevention is the best cure, as they say. In order to reduce the chances of this happening it's best to try to keep your battery and engine warm.

You can use various methods to do this from blankets to keeping your car in a heated garage. Oil or electrical portable heaters can also provide a few precious trickles of heat in an unheated garage to make sure you can rely on your car starting in the morning.

Also be sure not to unnecessarily use the battery when you don't really need to. Heaters, MP3 players, satnavs etc can also drain the battery. 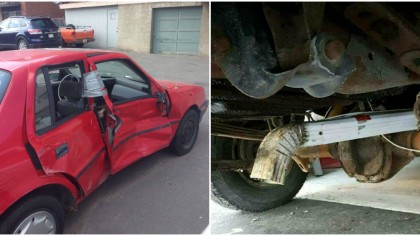 Also never leave your lights on when not needed.

Common fixes include using jumper cables to give the starter motor some power to get the engine going, replacing the battery completely or just recharging it.

Jump starting the car is the quickest way to sort the problem if you're in a hurry. This does, of course, mean you need to have some jumper cables and another car to hand.

Replacing the battery will, obviously, also get your back on the road. This may require you to contact your car recovery provider to get a new one to you.

Or beg your friends and family to help you out, or even give you a lift. Failing all that, you could always walk.

Water contamination can become a problem over time in car fuel systems. This can inevitably cause combustion problems and, when cold enough, the water may even freeze in the system.

This will prevent the supply of fuel to the engine which will obviously prevent it from starting or running altogether. The most sensitive parts of the engines are individual injectors.

These are very narrow and can readily become blocked with small ice crystals.

Diesel engines also have the added problem of the fuel thickening during cold weather. This makes it less free-flowing and can cause ignition problems.

You may even find the engine cuts out completely mid-drive.

Water in fuel lines will usually mean you need to seek professional help.  They will tend to need to complete a full system flush to clear the problem.

But you can obtain some additives to reduce contamination. These tend to have alcohol in them to hold water in suspension and then passing it out through the exhaust.

Another solution is to ensure you try to keep the fuel tank full. This reduces the likelihood of water ingress into the system.

Starter motors can also be a major cause for engines not starting in colder months. Many modern engines tend to include stop-start systems that are more resilient and so are less prone to issues with cold weather.

Symptoms of a starter motor issue

Most mechanics will tell you that if you hear a clicking sound when you try to start the engine it's probably the starter motor. Obviously, the engine will also not turn over as expected.

Most of your lights should be working fine - this also rules out issues with the battery.

Fixes for a problematic starter motor

Jumper cables aren't going to help you hear, sadly. You're most likely going to need to replace it altogether.

These parts shouldn't be too expensive in and of themselves, but replacing them can be a bit tricky. Unless you are a confident car maintenance DIYer, you will probably need to employ the services of a mechanic.

It shouldn't take more than half a working day to complete.

4. Alternators are on the blink

Alternators are your car's personal electrical generator. Part of their job is to keep your car's battery nicely charged up.

If your battery is relatively new but keeps running out of charge, the problem is more than likely the alternator.

Symptoms of a dodgy alternator

Ruling out any problems discussed earlier regarding your car's battery, your car just won't start.

If you do manage to jump start your car and the engine dies immediately, it tends to indicate a problem with the alternator.

Flickering headlights and dashboard lights and/or the fuel gauge acting erratically will also point to an alternator issue.

You may also smell a faint burning smell in the car if its alternator is overheating.

Fixes for a problematic alternator

It will need to be replaced. You can attempt this yourself but it's not the simplest of jobs.

The alternator is connected to the engine and battery so you might want to get a mechanic to do it for you. Getting a new part shouldn't be a problem but you can have your existing one reconditioned if you want.

5. Where present, carburetors have become frozen

For cars older than around 30 years old, it's quite likely it has a carburetor under the hood. These devices regulate the mix of fuel and air for combustion.

They also happen to be notorious for being affected by cold temperatures. Ice can build up in them fairly readily.

Symptoms for an iced-up carburetor

Basically, your engine simply won't start. If it does, then the engine will not run properly and may even stall frequently.

One fix to try is to place one foot on the clutch and gently push the accelerator pedal at the same time with your other foot when attempting to start the engine.

This will pre-inject a small amount of fuel to help give the engine a little boost. More modern cars with fuel injectors tend to be immune to this problem.

6. You've been using the wrong oil you numpty!

Like diesel, oil becomes more viscous when the temperature drops. This will, in turn, put extra strain on the car's battery as it is harder for the engine to turn over and start from cold.

Symptoms of using the wrong oil

If the oil you've used has too much cold viscosity your car simply won't start. Whilst this doesn't really help, you can rule out other problems from other potential issues above.

Obviously, another way is to check which oil you should be using and compare to the one you have been using.

Banging your head against the wall won't really help you here, so we'll rule that one out. Else you'll need to refer to the car's handbook or look on the internet for the type recommended by the car's manufacturer.

Typically 10W-30 and 5W-20 are needed for most cars. For reference, the first number followed by the letter W refers to the cold or winter thickness.

You may even be able to find 0W for extremely cold parts of the world.

Start a Career in Power Engineering with This Bundle

Advance Your Career in the IT Industry with this Training Bundle