This Keyboard Crumples Up to Fit in Your Pocket

The inexpensive and incredibly thin keyboards would only cost $1 each to make, according to its South Korean developers.

Bendable electronics continue to get smaller and more flexible, but a new portable keyboard could be the cheapest and most flexible developed to date.

Researchers from South Korea have developed an inexpensive keyboard so durable, thin, and flexible that it could easily be crumpled up and put in a pocket while still be usable.

The team wanted to create a keyboard that surpassed other flexible keyboards on the market. They noted those have limited flexibility and are still large even when rolled up to be compact. Most rollable keyboards available have rigid push buttons or a multi-layered tactile sensor array that restricts the flexibility of the keyboard. They also require an extensive fabrication process that adds up in manufacturing costs that buyers will pay for in the end. 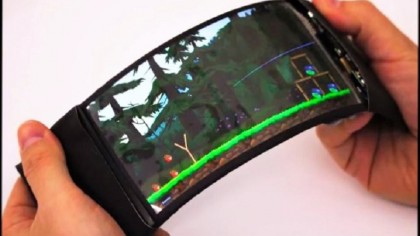 Keemin Sohn, Ji Sik Kim, Kee-Sun Sohn and their colleagues looked for an easier way. They developed a device using a sensor sheet they'd been working on with the previous project. They then used soft Ecoflex silicon rubber embedded with conductive carbon nanotubes.

These nanotubes can quickly respond to the push of a finger by registering changes in electrical resistance. The keyboard doesn't look like a traditional QWERTY keyboard. The researchers opted for squares on the surface of the sheet to represent numbers, letters, and other characters.

They then added a neural network to teach the keyboard how to identify the character or letter a user wants simply by locating the pressure and pushes applied in an area. The neural network would then register the differences in resistance on the keyboard and respond accordingly.

One of the most impressive parts of the new keyboard is its production cost. The researchers have intended for the keyboard to be tossed out and replaced with ease should it ever stop working. In total, the researchers estimate each keyboard would only cost $1 -- keeping both manufacturing and overall cost to user extremely low.

The study was published in a recent edition of the American Chemical Society Applied Materials & Interfaces journal.

Other Types of Bendable Electronics

The bendable electronics market has been growing for several years. With the advent of smaller technology and more responsive electronics, bendable screens and phones continue to capture the attention of gadget lovers.

In early 2017, Lenovo debuted its vision of futuristic laptops. While the company did not produce the laptop, Lenovo engineers explained their design of a flexible screen and built-in keyboard that could roll up with ease.

As industry leaders like Lenovo and smartphone developers theorize the possibilities of foldable electronics, other companies are busy developing them. Royole developed an ultra-thin AMOLED flexible display measuring just 0.01 mm in thickness.

Bill Liu, a developer with Royole, explained why flexible electronics are struggling to take off in major markets.

“There are a lot of things going on with a flexible display," he said in an interview with Android Authority's Kris Carlon in 2016. " There are many different materials – semiconductors, conductors, insulators, barriers, substrates – that you have to combine into a very thin film. If you change a single material you probably have to change many others to make everything compatible.”

Making a 3-in-1 Mobile Phone Tripod from PVC Fittings