An Israeli startup based in Rishon LeZion has created a portable machine that can literally create drinking water out of thin air. The company used their patented heat exchanger system known as GENius™ to dehumidify the air and extract water.

"The clean air enters our GENius heat exchanger system where it is dehumidified, the water is removed from the air and collected in a collection tank inside the unit," says co-CEO Arye Kohavi.

"From there the water is passed through an extensive water filtration system which cleans it from possible chemical and microbiological contaminations," he explains. "The clean purified water is stored in an internal water tank which is kept continuously preserved to keep it at high quality over time."

There are currently two versions of the water-generators; One known as the Ground Atmospheric Water Generator Unit (GEN-G) which can produce up to 450 litres/day and is the larger of the two, and there is also the Vehicle Atmospheric Water Generator Unit which is designed for use and transport in vehicles and can produce 30-75 litres/day depending on environmental conditions.

The technology itself is nothing new but the company claim to have achieved the best efficiency on the market right now. The secret to this efficiency is the use of the cooled air to cool the new air flowing in. This means that water production costs are significantly lowered.

"Several companies tried to extract water from the air," says Kohavi. "It looks simple, because air conditioning is extracting water from air. But the issue is to do it very efficiently, to produce as much water as you can per kilowatt of power consumed."

He adds: "When you're very, very efficient, it brings us to the point that it is a real solution. Water from air became actually a solution for drinking water." 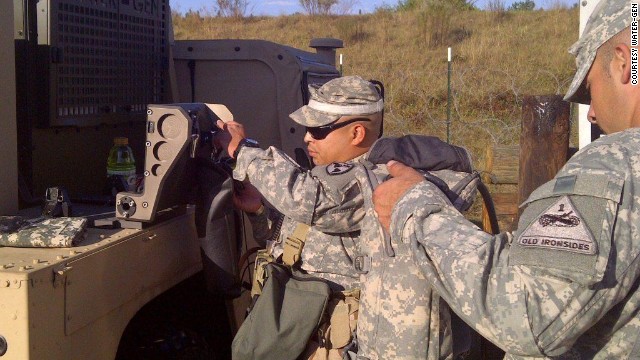 Both the machines have seen use in the military in seven different countries including the United States, India, France and Mexico, but Kohavi is keen to make the products available for civilian use as well.

"We believe that the products can be sold to developing countries in different civilian applications. For example in India, [drinking] water for homes is not available and will also be rare in the future. The Atmospheric Water-Generation Unit can be built as a residential unit and serve as a perfect water supply solution for homes in India."

He also went on to compare the cost of a 1 litre bottle of water, 15 rupees, to the production cost of 1 litre of water from the machine, 1.5 rupees.