This Man Built a Tile Roof Hut from Scratch

An Australian man whose name remains a mystery man with virtually no outdoor training built an entire tiled hut completely from scratch in just 2 months. The video is a little long, but I assure you, you will be mesmerized as the project evolves.

The man runs a YouTube channel called primitive technology where he, of course, builds houses and tools without using any store bought tool or any other item. In his most complex build yet, he demonstrates how to construct a tiled roof hut out of basic materials in a  forest. The hut is complete with floorboard heating and a future modification will also introduce a fireplace.

The man starts out using a celt stone axe that he previously made by hand and cutting down the necessary timber. The layout was a 2x2 square meter design. After digging 6 posts into the ground and laying out a basic infrastructure, the real magic takes over. First, he designs a kiln made out of mud to harden all of his materials. Then, after collecting a heap of clay, he molds a series of rooming tiles. They are then placed in the kiln to be cured.

Severe rain put a damper on the project, setting it 36 days behind. Some unfired tiles melted away, and the hut began to retain mold before he decided to build yet another addition. A beautiful woodshed was built to house all of his work and protect it from the rain. The roof was then finished with the tiles and the construction of the walls began. Made up of just mud and stones, incredibly it held up perfectly. An underfloor heating system was added by creating a slanted tunnel covered by rocks from a pit for a fire lower down. Incredibly, it worked amazingly. 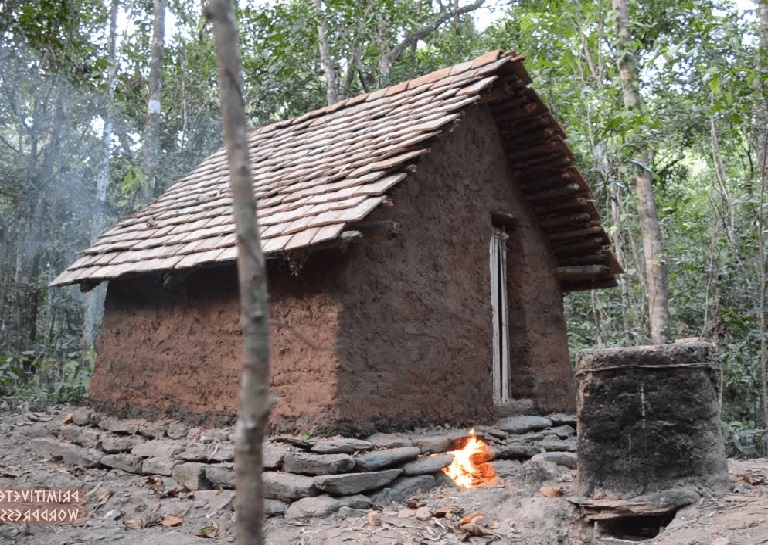 102 days later (with over a month of rain included), the project was complete. It is simply fascinating to see how such an intricate house can be made with just bear hands. It would seem the modern world is climatized to industrial production of nearly everything, and the traditional roots have nearly been forgotten. Fortunately, Primitive Technologies is making sure to document  an unprecedented guide on how to build a traditional hut fixated with all the essentials. In the end, it is almost unbelievable he crafted such a magnificent design with just his bare hands and some clever ingenuity. Had I not seen the video for myself, I certainly would have called fake. However, Primitive Technologies brings humanity down to the roots where commercialism and reliance did not exist. In ancient times, it was up to build a sustainable house. Now, it is documented step by step exactly how it was done in a beautiful fashion. You can read more about the project and many others at his website: Primativetechnology.wordpress.com

SEE ALSO: Students Design Huts to House the Homeless for Less than $1000