Christoph Rossner is a German entrepreneur who is taking advantage of the recent legalization of medicinal weed in Germany, by turning an abandoned air base into weed central.

A German entrepreneur is planning on turning a former NATO air base into a weed farm. Christoph Rossner wants to take advantage of the recent legalization of medicinal cannabis in Germany by becoming the leading legal weed grower in the nation.

The 50 meters long and 15 meters high bunker was originally part of the Memmingen military base from 1956 to 2003. It was there that NATO planned to launch nuclear weapons in case the Cold War ever got out of hand. It's been abandoned for almost 14 years, but Rossner wants to work with the Bavarian government to change that.

There are multiple doors made of 175 tonnes of hardened steel leading to the central atrium of the bunker where future employees of Rossner’s company Bunker PPD will leave their belongings before entering the sterile facility clad in overalls. The security measures, including fingerprint scanning, are due to German government regulations put in place to prevent the chances of product illegally exiting cannabis labs.

Rossner’s farm isn’t only for commercial purposes it also intended to be a part of a study done its partnership with the Technical University of Munich and The University of British Columbia in Vancouver, Canada to investigate the effects of different strains of medicinal marijuana, and to develop quality standards for each strain.

"We are in the starting blocks,” Professor Wolfgang Eisenreich from the Faculty of Chemistry of TU told BILD about the developmental stages of this project. They have yet to receive approval from the Federal Institute for Drugs and Medical Devices. Once this happens, Rossner and his team could start providing 150 patients with cannabis from his bunker by March 2018. 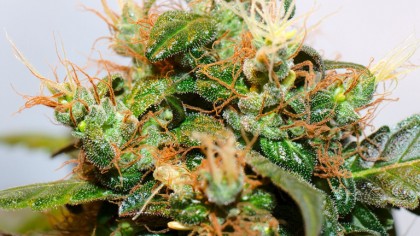 Rossner is old hat at this business, in the late 90s, he set up an illegal “weed pharmacy,” providing medicinal cannabis to cancer and arthritis patients according to VICE. In 2000 he was caught and was sentenced to two years and one month in prison. He only spent five months in there and four months in therapy.

Now with medicinal weed legal, the bunker is the perfect place to start his new endeavor. It houses an industrial furnace once used to incinerate toxic materials; now Bunker PPD will use them to burn excess cannabis.

The next step is to speed up the Federal Institute for Drugs decision. Rossner is filing a lawsuit against their requirements for producers to prove they’ve already grown, processed and delivered at least 50 kilos of cannabis for at least three years before now. This is something Rossner thinks makes no sense since no-one would have been dumb enough keep records of their illegal dealings before the law changed.

However, German Chancellor Angela Merkel has no plans to change the current laws anytime soon, the drug is currently available to seriously ill patients on a case by case basis. At the moment, there are no plans to disperse in public pharmacies or dispensaries.