The 'Chameleon Mask' is a tech kit that lets you send a surrogate version of yourself to meetings and events.

If you have ever been overstretched and found it hard to make it to all your social and work commitments, the answer is here. 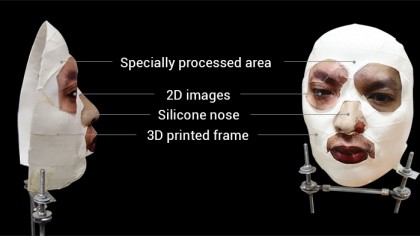 Welcome the Human Uber, a concept that lets you hire somebody to go to a meeting for you with an iPad strapped to their face so you can see and hear everything.

The utterly bizarre concept was introduced at MIT Tech Review’s EmTech conference in Asia earlier this year. Japanese AR/VR researcher teamed up with Sony to present the idea and its technology.

The device, known officially as the Chameleon Mask is described as ‘a telepresence system that displays a remote user’s face on another user’s face’.

Surrogate can use body language and channel emotion

Why is this any better than just beaming yourself into a meeting via Skype? Because with the Chameleon Mask your surrogate can communicate with your friends and colleagues with body language as well as verbally.

The Chameleon Mask's inventors say that the mask's applications are endless. If someone can’t be physically present to give a lecture or talk, a surrogate body can host the presenter's face and deliver a compelling talk even without being there.

Other applications lean towards the weird, like the idea of ‘Telepresence idle’.

The Chameleon Mask team suggests their technology could be perfect to make popular anime characters more real. A human actor dresses up in the anime character's typical clothes then wears the mask of the characters face.

The tech required for the Chameleon Mask is gadget heavy but relatively simple. A VR mask, smartphone and iPad is worn by the surrogate. This setup is connected to the  ‘director’ who sits in front of a camera in their location.

Arrested Development may have served as inspiration

The idea seems both highly futuristic and also strangely low tech echoing the weird ‘Larry Middleman’ surrogate character from long-running comedy series, Arrested Development. George Bluth hires Middleman as his surrogate so he can attend family meetings while he is under house arrest.

Middleman's character wears a cap with a camera and an earpiece with which he relays everything Bluth says to him. Although not quite the Chameleon Mask, the joke is eerily similar.

It’s not clear if the Chameleon Mask creators are continuing to develop their idea. But their website has links to more videos and some published academic studies related to the weird and brilliant invention.

Can't do this simple balancing act? You're more likely to die soon