This Massive QR Code Made of 130,000 Trees Can Only Be Scanned From the Sky

The small Chinese village of Xilinshui came up with a unique plan of making an enormous QR code of carefully arranged trees, all in the hopes of drawing in more tourists.

In an unbelievable bid to increase tourism in China, a local village planned an enormous QR code consisting of over 130,000 meticulously trimmed and arranged trees! The village of Xilinshui in China’s northern region pulled off the feat using only a variety of juniper trees native to the country, with heights ranging from 80cm to 2.5 meters.

Reports are mixed, incidentally, on the main question of whether or not the huge QR code can be scanned, or more importantly, what the minimum height should be to capture the code.

For the lucky few who capture and scan the image, they are linked to Xilinshui’s tourism chat which is part of WeChat. Whether a public relations ploy or a QR code marketing agenda, news about the massive QR code is generating considerable buzz.

With tech industry giants using face recognition software and the buzz surrounding AI-developed technology, it may be the case that QR code is simply out of its league, technologically-speaking. However, does all technology necessarily need to be sophisticated in order to serve a purpose?

One interesting and arguably effective use of the codes was reported last year in Japan, Orange Links, a local Japanese company, developed a QR code nail sticker which could be applied to the wearer’s fingernail or toenail. With a very large elderly population, of which almost 10% of the population has dementia, the 1cm stickers contain address, telephone number, and identification information. In this context in Japan "there are already ID stickers for clothes or shoes but dementia patients are not always wearing those items."

In most countries, however, QR codes are a reality that consumers greet with mixed reactions. The little black and white patterned squares store everything from prices of consumer goods to recipes for food. In most countries, they are tolerated and are fairly below the radar, perhaps because interest or use is still not very high. In China, however, it’s a different story: the codes have somehow pierced the bubble of popular interest. As we all know, once this occurs there’s not much going back. The goal of creating a cashless society seems within the reach of many who use the codes. 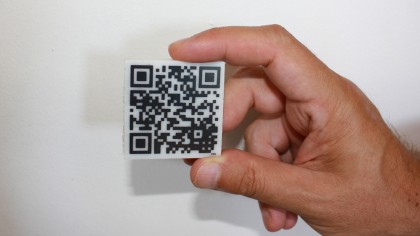 Professor and researcher Chen Yiwen with the Beijing-based Institute of Psychology, Chinese Academy of Sciences said of the large-scale shift to QR codes in China: “China has started the transition to a cash-free economy faster than anyone could have imagined, largely because of the viral spread of two-dimensional barcode…It creates a new economy based on scannable codes.”

As QR codes continue to pop up in our lives and be used in a number of interesting ways, the question remains: are they being underutilized due to lack of interest or due to lack of creativity? For now, it is fairly certain that it’s a bit of both.