Imagine swimming and then hearing the sound of an automatic weapon. You might be near a Gulf Corvina.

Whether you are coasting down a river or treading water in the ocean, there is something a little uneasy about swimming in a large body of water. Even if the water is crystal clear, swimming in the water is a major fear for a lot of people. Maybe it is Hollywood, but there is always a feeling there might be some unseen creatures watching us from the depths or a creepy fish that science has yet to discover.

Aquatic life is always surprising and intriguing scientists, and the Gulf Corvina is one of those creatures. A fish native to Mexico's Colorado River Delta, the Corvina is known to make sounds that have been described as a machine gun, maybe one of the load-outs from the Halo series.

Every year, around late winter, and early summer the Gulf Corvina meet to breed and catch up in Colorado's River Delta. What is interesting about this reunion, when the time is right, usually before a full moon, the male fish begin to break out into song. The people around the area, have described the sounds coming from the river as something that sounds like the firing from an automatic weapon. This love song to attract females has been documented as the loudest sound from any fish around the world. How romantic.

Timothy J Rowell at the Scripps Institution of Oceanography in California have been observing the fish since 2014 with sonar and underwater microphones. "When you arrive at the channels of the delta, you can hear it in the air even while the engine is running on the boat," says Rowell. He also goes on to further state that it is the "loudest fish ever documented."

The microphones used to record the romantic fish clocked in the fish sonics as loud as 202 decibels. 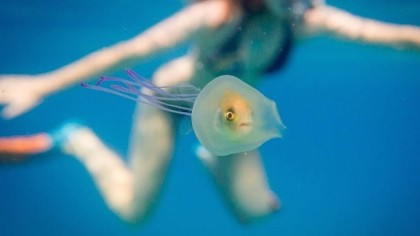 Impressively, the only marine animals that are louder are whales. According to Rowell, the Gulf Corvina have air sacs called swim bladders tucked within their bellies called, sonic muscles. Like a little drum kit, when the fish contract their abdomens, the muscles strike against their bladders like a drumstick or snare. "The fish reach a crescendo during high tide. The chorus begins like the low rumble of a baseball stadium and ends like an angry beehive" says Rowell.

The fish are intriguing creatures and manage to boggle researchers. Imagine enjoying a nice swim, and as you dive under you begin hearing sounds that resemble a fully automatic weapon. You would be a little freaked out. Yet, maybe the Gulf Corvina has a future in the music business.