This Modern Barrel Makes Rainwater Harvesting Simpler Than Ever

This raindrop shaped barrel is a welcome change from the bulky rainwater collectors we're used to.

Rainwater collection is becoming more and more common in eco-friendly house designs, and this product from Dutch product design studio, Studio Bas van der Veer could make the process both easy and aesthetically pleasing. It was recently unveiled at the three-day fair, spoga+gafa 2017, in Cologne.

The drop-shaped apparatus called “Raindrop” can be attached to any 50mm – 80mm drainpipes and on rainy days the surplus water drains into the bulbous reservoir for storage and eventual use. Its unique shape is “ a symbolical reference to what the design contains: water,” says company founder Van der Veer on their website.

There is also a tap at the bottom allowing for drainage, and easy refill, plus a hose can be attached to the base. Additionally, there is a watering can accessory, fitted into the top which can be removed and separated for use around the garden. The barrel is hand cast using a meld of techniques like CNC milling and thermoforming.

This interesting new design has gained heaps of praise including the Journées des Collections Jardin-Innovation Award and the TuinIdee Award.

8 years in the making

The design was first introduced eight years ago when Van der Veer debuted this drop-shaped design as a part of part of his thesis for the Design Academy Eindhoven. Back then it was called, “A Drop of Water.”

For this, he won the prestigious René Smeets Award for best project at the school’s Graduate Galleries exhibition but was also shortlisted for the Melkweg Award. After multiple redesigns, Raindrop came to be.

Included in the collection is a smaller version called “Raindrop Mini” for more tight spaces like apartment balconies. There is also a larger model named “Pure Rain” with an added birdbath.

Pure Rain has the capacity to hold 125 liters of rainwater plus the Raindrop watering can fit underneath the tap for use in its surroundings. The birdbath on top is just an added treat.

With support from pottery label Elho, the Raindrop will be on sale at the beginning of 2018. Look out for it in garden centers, online and in home stores worldwide. 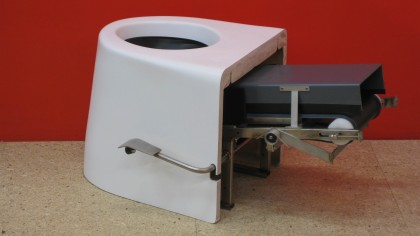 1% of the world’s water is drinkable, and with a growing global population making it harder to sustain life, we need to come up with sustainable solutions. The main benefit of rainwater harvesting is the reduction in cost for a household. “In the case of a domestic system, it may be that you could save 40-50% on water bills by drawing the water you need for washing clothes and cleaning your car from a reserve tank,” claims The Renewable Energy Hub. It’s also important to reduce the amount of mains water used for things that don’t involve human consumption. Ecologically it’s also useful for drainage systems by substantially reducing the effects of flooding by finding a place for excess water.