This Modular Autonomous Car Could Change the Way We Commute

The Oiio design team is dissecting the way we will drive in the future. Their bubble-shaped design could be the way you commute in 2060.

In the Future, the way you travel to your favorite places may be very different from what you expect. Design-centric tech startups are eager to change the way we travel to create a more sustainable future. Whether it is Elon Musk's impressive, partly autonomous Telsa electric vehicles or the powerful Rimac Concept One, electric vehicles will be part of our everyday life. But, there is a small revolution happening within the automotive industry. The traditional ways of thinking about a car are being thrown out of the window. The design team at Oiio has done just that. 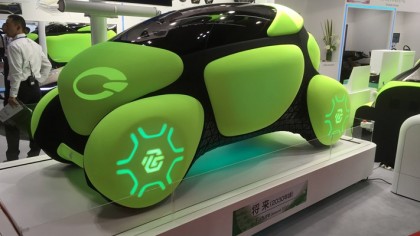 This Car Covered in External Airbags Will Never Get a Dent

Modular Design For Your Needs

Anyone living in the in Los Angeles can tell you that traffic there is a nightmare, and is ranked a one the worst in the United States. What is even more important to consider is the impact gasoline burning cars have on the environment and global warming. To tackle these issues on top of many other design issues the Oiio design team has created the AI autonomous car of the future.  They started with the question, "what if we were able to dissect a working car into working components which could be utilized according to given circumstances?"

The Oiio design team very literally dissected the modern car and created something beautifully unique. The team took apart the cabin, trunk, engine and other parts to create a bubble looking car that can be customized for any environment.

Rather than driving to work. Your driver would be a highly intelligent AI system. You would act more as a passenger, making physical driving would be a thing of the past.

The Oiio vision is modular. Each day, you would start the day off with your Oiio car. However, based on the needs of the day, your car will be assembled to fit your travel. The breaks down their vision stating, "In the future LA people would be able to own only the Cabin and, through AI centrally controlled circulation, they could create a temporary assembly-unit, an ephemeral design, which would serve their “exact” needs on demand".

The Oiio team even took another look at how we travel on highways, very literally flipping it on its head.  In the Oiio future, we could be not only traveling horizontally but you could also be traveling vertically when you commute to work. Would you be interested in an Oiio designed car? The car could be coming to a dealership near you in 2060.

For the uninitiated, the Oiio team is a design based in California dedicated to telling architectural design stories. If you are interested in some their other great designs. Check out the company here.