This Moveable Structure Made Out Of Buckets Carries A Vital Message

This wave-shaped structure, called “One Bucket at a Time”, was built by connecting 2,500 five-gallon paint buckets to a grid of ropes creating a malleable surface, that viewers are encouraged to explore.

Designers in Mexico City transformed a public space into an interactive, pop-up installation, made of 2,500 five-gallon paint buckets formed into a fluid shape.

Called, “One Bucket at a Time,” the wave-shaped sculpture was created from a collaboration between Factor Eficiencia and 5468796 Architecture for March’s MEXTROPOLI 2017, a four-day architecture festival in Mexico’s capital.

The idea was born from an illegal cultural practice prevalent in Mexico City Typically, in the metropolis, many problems occur due to a large population of more than 23 million people and a complex road system that caters to 4.5 million daily commuters. Parking space can be few and far between.

According to 5468796 Architecture, “The street—the prime public space—is the setting for all such friction.”

They bribe the local police force in order to allow them to use painters’ buckets to claim parts of the street. They then charge drivers looking for parking spaces with a fee to use their illegally claimed parking lot. If you fail to pay the consequences are harsh, including shattered windshields.

“One Bucket at a Time” was inspired by this universally accepted practice and was built by connecting the buckets to a grid of ropes creating a malleable surface, that viewers are encouraged to explore.

“The surface can be rolled, pulled together or up to a point or along a line taking on different forms. People can sit, run, play, stand, lounge, and participate in the act of taking over the public realm,” said 5468796 Architecture on their website.

Overturned buckets were also present for the public to sit on while viewing the structure.

The use of buckets carries a heavy significance for the designers, the purpose of the structure is a way for the Mexican public to reclaim their space by using a tool utilized by greedy opportunists.

It will be in situ for three days then gradually taken down, “released from the ropes and absorbed by the city,” wrote the designers.

MEXTROPOLI is an annual festival giving Mexican citizens an opportunity to experience their space through architecture. The forum is the only one in Latin America to bring together more than 52,000 people over 4 days. Included in the presentations are students, citizens, professionals, tourists, creatives, public servants, artists, opinion leaders and experts in the field.

Another exhibit that made an impact at the festival was WOHA’s “Garden City Mega City,” which presented over two decades of their international designs, which propose the “introduction of biodiversity and lively public spaces into vertical, climate-sensitive high-rises within megalopolises,” stated Arch Daily.

Planning for the next festival is already underway, though no dates have been confirmed as yet. Arquine, their annual competition will also soon be open for entries, the contest brings in an average of 400 entries from 20 countries. 2018 should prove to be just as thrilling as this year was. What can you do with the space around you? 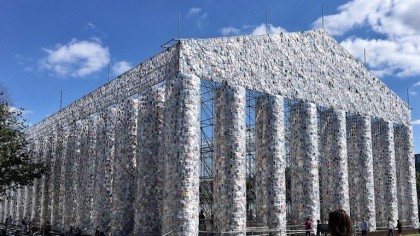 Artist Recreates the Parthenon out of 100,000 Banned Books at Historic Nazi Book-Burning Site