The self-flying robot Astrobee will take its place in International Space Station (ISS) in 2019. Astrobee can help astronauts aboard the ISS in a variety of tasks.

A self-flying robot designed by NASA and whose design was based on the "training remote" in Star Wars is going to become part of the International Space Station in 2019.

The robot, called Astrobee, is planned to assist the astronauts in a range of activities, going from housekeeping to spacecraft monitoring and maintenance. The Astrobee is a recent system developed around NASA’s SPHERES research.

SPHERES is the acronym for "synchronized position hold engage and reorient experimental satellites." However, the robots are not spherical. They are made of cubes, which are one-foot by one-foot, and they have rounded corners and bumpers.

The Astrobee is designed to have cameras, sensors, a touchscreen and an arm. It can also secure itself a place on the spaceship. The robot has fans and lasers on it and can make maneuvers in zero-gravity.

"A crew can't be depended on to do everything necessary to maintain a spacecraft. Astrobee is a step in advancing that type of technology," CNBC reported Astrobee Program Manager Jose Benavides as saying.

SPHERES consist of 3 free-flying satellites on board of the ISS. They test a wide variety of hardware and software from scientists all over America. The SPHERES Project has been active for 10 years. It is one of the most popular NASA projects.

Astrobee can save astronauts time

The Astrobee can cruise by itself around the space station. It pays attention to factors such as air quality, sound levels, and the many tools astronauts need to do their jobs and where they are. This gets rid of the need for astronauts to spend energy and time looking around the ship or searching for items they can’t find.

The Astrobee has an autonomous mode which will make it useful on trips to Mars depending on if spacecraft cannot communicate with other ships or with Houston.

The researchers on Earth can also control the Astrobee robots remotely. Researchers can use Astrobee to monitor and interact with the astronauts, systems and experiments on the space station.

“For engineers, researchers, and scientists developing advanced technologies, operating Astrobee on the ISS without astronaut supervision means opening up opportunities to experiment and test capabilities at lower risk levels,” NASA said on its website.

"Magnetic propulsion, for example, is a promising technology for controlling swarms of satellites flying together in perfect formation. It could enable a group of satellites to form a giant space telescope that could even look for signs of life in the atmospheres of planets orbiting other stars." 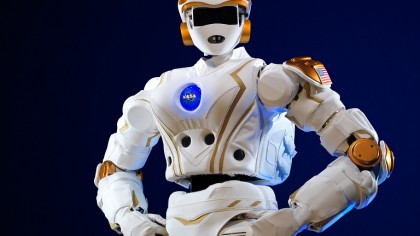 The Astrobee gives the flight controllers the ability to fly around the station without ever having to leave Houston. The controllers can see and hear the station activities through the microphone and cameras. They can monitor and carry out experiments, or monitor routine chores by remote control.

Astrobee's design was inspired by the "training remote" in Star Wars, the smart robot which helped Luke Skywalker learn how to use a lightsaber blindfolded. It was a self-flying robot used in combat training.

Astrobee is currently being developed by the NASA Game Changing Development Program. Beginning in 2018, it will be operated as a facility backed by NASA Advanced Exploration Systems (AES).