This Needle-Free Injector is About to Replace Traditional Shots

An MIT startup is about to hit the market with a needle-free alternative to injections.

Getting injections can be a terrifying experience for any child, and that fear can be hard to shake off as we get older. Certain patients suffering from chronic diseases have to endure several injections weekly and even daily in order to survive. Injections for any age group normally conjure up one image -- needles.

An MIT startup wants to change that by removing the needles entirely. This could save millions of people the chronic anxiety and pain associated with getting shots each year.

The startup, Portal Instruments, recently landed a commercialization deal for its needle-free injection device. The device works by delivering a jet-injection of medicine directly into the skin. The high-pressure medicine travels in a stream no wider than a strand of hair. The device also connects to a smartphone and allows the user to track each dose and its effects in real time. Patients then upload that information to the cloud so their doctors and nurses can track the injection as well.

The project's research was largely developed by Ian Hunter, a professor of thermodynamics at MIT, and one of his students, Patrick Anquetil. The two co-founded Portal Instruments in 2012.

The two developed the device, called PRIME, and its signature disposable vessel. Drugs are loaded into the vessel with a small nozzle at the tip. The vessel is then placed into the device, and an insanely powerful actuator pushes onto a piston which pressurizes the drug and sends it out through the nozzle.

"If you do the math, the jet comes out at about Mach 0.7, so almost the cruising speed of an average commercial airliner," Anquetil said. The team acknowledges that similar jet injection devices exist, but none of them offer the control that PRIME offers patients, Anquetil noted.

"Our main driver is to think of patient comfort at the system-level … and fundamentally change how physicians and patients interact," Anquetil says. "That comes from our MIT training."

And from there, Anquetil and Hunter saw that they could offer something to the pharmaceutical market that had been missing. Even after Anquetil graduated from MIT in 2004, he kept in touch with Hunter. During a lunch meeting, Hunter proposed the idea that recent technology he'd been toying around within his lab could result in something bigger. 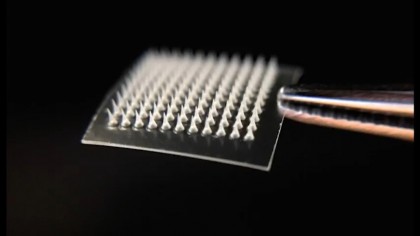 "Ian told me this technology is ready for prime time," Anquetil recalled. "It was great technology that had interest on the industrial side. We knew we could spin a company off around that."

PRIME is now primed for use. The Portal Instruments team is partnering with Japanese pharmaceutical company Takeda in order to develop the device further. According to both companies, the first potential use for PRIME includes Takeda's Entyvio, a medicine for adults with Chron's disease. Currently, patients receive the medicine through an intravenous infusion, but PRIME is in the final phase of clinical trials. Portal could earn up to $100 million in the partnership.

"All along we’ve envisioned a device that was a universal injection machine," Anquetil said. "Now that we’ve shown a viable business model — to partner with pharmaceutical companies to enhance their therapies — we can expect a few more partnerships next year and in the years to come."