This New Bacteria-Based Thermoelectric Paper is Both Sustainable and Recyclable

The device uses sustainable, non-toxic materials that can either be recycled or recovered and reused.

Thermoelectricity is an impressive two-way process that consists of the conversion of temperature differences to electric voltage and vice versa. As such, scientists have been working for years on finding ideal thermoelectric solutions and materials.

Now, researchers at the Institute of Materials Science of Barcelona (ICMAB-CSIC) have developed a new concept of thermoelectric material that is both sustainable and recyclable. The novel device is rather simple but highly effective, and it makes use of easily accessible bacteria. 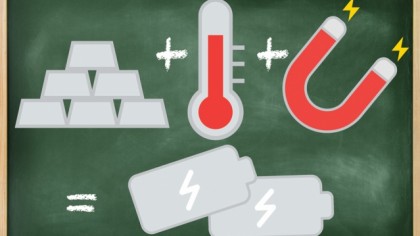 "Instead of making a material for energy, we cultivate it" explained Mariano Campoy-Quiles, a researcher of this study.

"Bacteria, dispersed in an aqueous culture medium containing sugar and carbon nanotubes, produce the nanocellulose fibers that end up forming the device, in which the carbon nanotubes are embedded."

In essence, the newly-developed device is composed of cellulose that is produced locally in the laboratory by bacteria. It also features some conductive nanomaterial called carbon nanotubes. The result is nothing short of impressive.

"We obtain a mechanically resistant, flexible and deformable material, thanks to the cellulose fibers, and with a high electrical conductivity, thanks to the carbon nanotubes," explained further Anna Laromaine, researcher of this study.

But what is most important is that the material is not damaging to our environment. In fact, the researchers relied on the concept of a circular economy, a regenerative system in which the waste of input resources and energy leakage is minimized, when they engineered the device.

"The intention is to approach the concept of circular economy, using sustainable materials that are not toxic for the environment, which are used in small amounts, and which can be recycled and reused," explained Anna Roig, researcher of this study, "The device is made with sustainable and recyclable materials, and with a high added value."

Better yet, the material is even more efficient than other similar traditional counterparts. According to Roig, the material has higher thermal stability, allowing it to reach temperatures of 250 °C.

The device further uses no toxic elements while its cellulose can easily be recycled and its carbon nanotubes, the most expensive parts of the system, can be recovered and reused.

In addition, the thickness, color, and transparency of the material can all be controlled meaning the paper can be put to use in all kinds of applications.

"In the near future, they could be used as wearable devices, in medical or sports applications, for example. And if the efficiency of the device was even more optimized, this material could lead to intelligent thermal insulators or to hybrid photovoltaic-thermoelectric power generation systems" explained Campoy-Quiles.

The study published in the journal Energy & Environmental Science

Combining Art and Crypto: What Is This NFT Hype All About?