This New Coating Can Protect Electronics and Surfaces From Every Liquid

The University of Michigan has conceived of a new coating that can repel nearly all liquids. The new material is clear, durable and can easily bind to any surface.

The University of Michigan has published a new study in the journal ACS Applied Materials & Interfaces that demonstrates a new coating that swiftly sheds water and oil-based liquids, alcohols and many more. The coating, called "omniphobic", could soon be used to protect electronics and surfaces from nearly everything.

The new liquid-repellent coating is the work of the lab of Anish Tuteja, associate professor of materials science and engineering at the University of Michigan. The product is durable, clear and can easily be applied to any surface making it very multifunctional.

“I have a 2-year-old at home, so for me, this particular project was about more than just the science,” Tuteja said. “We’re excited about what this could do to make homes and daycares cleaner places, and we’re looking at a variety of possible applications in industry as well.”

A unique mix of substances

The ingenious material is the result of a unique combination of fluorinated polyurethane and fluid-repellant fluorodecyl polyhedral oligomeric silsesquioxane (F-POSS). Tuteja’s lab decided on this carefully selected clever mix by “mapping out the fundamental properties of a vast library of substances” in order “to mathematically predict how any two will behave when they're combined.” 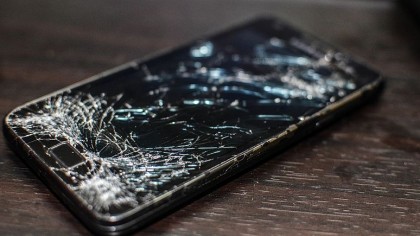 "You can repel water with a rough surface that creates tiny pockets of air between the water and the surface, but those surfaces don't always repel oils or alcohols because of their lower surface tension," said Tuteja. "We needed a very smooth surface that interacts as little as possible with a variety of liquids, and we also needed ingredients that mix together very well, because too much phase separation between ingredients will scatter light."

This process allowed the researchers to conceive of a recipe that delivered a coating “that can be sprayed, brushed, dipped or spin-coated onto a wide variety of surfaces, where it binds tightly.” The researchers also took into consideration strength and transparency when creating their recipe resulting in a product that is durable for everyday use but clear.

"The repellent and binder mix together well enough to make a clear coating, but there's a very small amount of phase separation between them," said Mathew Boban, a materials science and engineering graduate researcher and an author on the paper." That separation allows the F-POSS to sort of float to the surface and create a nice repellent layer."

Tuteja says his product would be cheap to manufacture and could go to market within the next two years. His team has already begun studies to ensure it is non-toxic in order to be used in childproof coatings.

Via: The Michigan Engineer News Center

New Liquid-State Battery Can Function in Room Temperature, Has Many Lucrative Applications