Researchers have been able to develop hybrid solar cells which can generate power from raindrops.

Solar panels are becoming more advanced and efficient every day. However if the weather is not sunny, but rainy, they are still not very useful. Thanks to a new hybrid cell that scientists are working on, which can produce energy from both sunlight and raindrops, this could soon change.

"Our studies demonstrate a new concept in the utilization of energy during various weather conditions," it said in the research published in ACS Nano. The triboelectric nanogenerator or TENG forms the key part of the system.

This is a device which creates electric charge from the friction of two materials rubbing together. Similar to static electricity, it’s about the shifting of electrons.

TENGs can draw power from a variety of things such as car tires hitting the road or clothing materials rubbing up against each other. In this case, it is the rolling motion of raindrops across a solar panel.

The research by the scientists from Soochow University in China found out that the end result was a cell that works in rainy weather as well.

Developing a system that is not too heavy

The idea of using TENGs is not completely new but the important thing was to develop a system that was not too complicated or heavy. In this case, two polymer layers were used to make a TENG on top of a photovoltaic cell.

Using the imprints from normal DVDs that we use at home to watch movies, the researchers added slits to one polymer to improve its efficiency in gathering energy. The textured polymer layers acted as a mutual electrode for both the TENG and the solar panel underneath in tests.

They conduct energy between the two devices when raindrops fall and bring the layers into contact. The extra layers were transparent and sunlight could still be captured. But it was not at such an efficient rate as was possible without the extra layers on top.

The best thing about this is that it also rains at night as opposed to having sunny weather just during the day. So it might even be possible to get solar farms working 24 hours despite the weather in the future. This would add another boost to the potential of renewable energy. Scientists have been working on this idea for quite some time now. 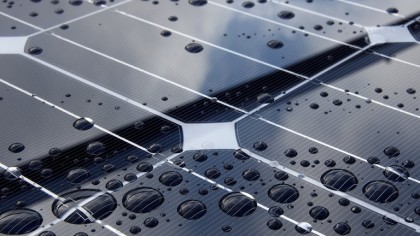 Solar Cells that Could Generate Energy from Rain

In 2016, researchers from the Ocean University of China generated electricity from raindrops falling on a solar panel. They did this by adding an extra graphene layer. Scientists were able to get the ions bind to the graphene which acted as a pseudocapacitor after separating the positively charged ions in salty rain.

There were two layers with different energy levels that produced an electric current. The main drawback again was generating enough electricity to make it work outside of laboratory conditions. But it still feels as if we are making significant progress in getting solar panels that do not need only solar input.