The Ark Two is the name given to North America's biggest underground nuclear bunk, located just outside the city of Toronto on Horning’s Mills.

We’re all familiar with the nuclear fallout shelters and secret underground compartments created for members of the military and other high-ranking government officials. One example of an impressive civilian structure could even inspire a Hollywood screenwriter.

Named the Ark Two Fallout Shelter—a biblical reference to Noah's Ark created as a safeguard against future or impending global disasters—it's situated on sprawling land located on the outskirts of Toronto, Canada. The roomy structure consists of dozens of hollowed-out schoolbuses which have been arranged in an intersecting block pattern, and all of this surrounded by reinforced concrete. The complex was built roughly 4 meters underground.

The shelter can accommodate roughly 500 people and covers just over 3,000meters of underground space. The Ark Two, which has the distinction of being North America's largest private fallout shelter on record, is located on a site named Horning's Mills and was built by local couple Bruce and Jean Beach.

Though the Beaches chose school buses for a unique purpose, there is a reason why the vehicle has also been a popular choice for converted living spaces: they are spacious—and therefore easy to hollow out and redesign the space—structurally sound, and relatively inexpensive. Construction began almost forty years ago, in 1980. They have equipped the space to function as a working outpost after a catastrophic event: areas for daycare centers and doctors, plumbing facilities, kitchen, and even laundry facilities.

Over the years, undeterred by challenges from the courts and zoning inspectors making the case that the structure was erected without a permit and continues to operate in this manner, the couple has continued stockpiling supplies, guided by their own internal Atomic Doomsday clock. However, Mr. And Mrs. Beach, at ages 83 and 90, are also battling against their own biological clocks. One wonders what the fate of the complex will be in the next 5 to 10 years.

The complex is manned by a short list of trusted volunteers, which is a plus, however, aging equipment, as well as aging food supplies, have been a big concern over the years: “I don’t know how many tons of food we have had to throw out over the years,” Mr. Beach confesses. 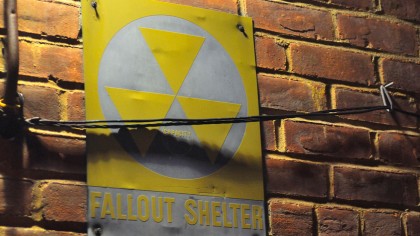 We are all accustomed to hearing stories about unearthed treasures and underground cities dating back to ancient civilizations: the frantic rush of teams of archaeologists and anthropologists to the site to collect precious data and specimens, the media blitz that occurs shortly after to provide background about the civilization and fill in missing gaps, and finally the lingering question about which museum—in which country—the treasures will finally find a home. In this case, however, we have a kind of open, and living, time capsule: 3 Commodore 64 computer monitors (a computer which by most accounts would belong in a museum), for instance, are used as security monitors.

Whether or not the catastrophic disaster the couple is preparing for actually strikes in the future, this complex is a reflection of the ways in which some people view the impact of the digital age and its effect on our planet.