This Octopus-Inspired Robot Can Swim, Grasp Objects and Crawl Around

Researchers in Italy built a soft robot based on the anatomy and physicality of an octopus that moves and propels almost exactly like the real thing, they even tossed their prototype in the Mediterranean for a test drive.

Biomimetics is defined as the imitation of the models, systems, and elements of nature to solve human problems considered complex.

For example, the tiny hooks on bur fruits inspired Velcro tape back in 1941. These days, however, the technology is advancing further, and the field of robotics is aiming to implement the wonders of nature into its operations.

Researchers at the BioRobotics Institute of the Sant'Anna School of Advanced Studies, in Pisa, Italy developed a soft robot based on the anatomy and physicality of an octopus. Octopi are particularly fascinating due to their ability to camouflage in a flash, thanks to their unique cephalopod skin. Also, the malleable nature of their bodies can allow them to squish themselves into just about anywhere.

Cecilia Laschi, the leading scientist of the team which developed this Octo-bot, described her reasons for choosing the eight-legged marine animal as her robotic inspiration.

“I chose to build robots that mimic the form of the octopus for two reasons. First, because they’re well suited to demonstrate the many advantages that come when a machine can flex and squish as needed. Also, it’s an excellent engineering challenge: An octopus with eight wiggly arms, which must work together in the face of complex hydrodynamic forces, is very difficult to design and control,” she writes in a 2016 article in IEEE Spectrum.

The ultimate goal of Laschi’s Octo-bot research and development was to promote a “fundamental rethinking of robotic theories and techniques,” using an animal like an octopus helps develop strategies for a robot that can curl its limbs in multiple directions, and create materials that could be used in actuators that bend and stretch.

A cephalopod robot could be useful beyond factories and industries that require repetitive tasks; it would probably be more suited to changing landscapes like the much-unexplored ocean floor or the alien terrain of Mars. A robot that can adapt to any environment without getting stuck and even serve as autonomous surgical tools for inside our bodies.

They began by studying the octopus’ arms and its muscular hydrostat structure, “which allows the overall volume of the arm to remain constant while individual muscles contract and change shape.” They also worked closely with marine biologists to gather data such as arm measurements to create accurate computer models that would help direct the overall design.

Eventually, they started experimenting with soft actuators to mimic the animal’s muscles. They created muscles using SMAs or shape-memory alloys which when heated, deform to a predefined shape, which they “remember.”

“We fashioned SMA wires into springs and ran electric current through them to heat them, causing the springs to scrunch up in a way that imitates muscular contractions,” writes Laschi.

By sending a voltage through different sets of springs, they were able to make an underwater arm bend at multiple points, and even grasp objects, much like an octopus.

To make it swim, they once again turned to computing to design the octo-bot’s mantle or head of an octopus which gathers water and contracts to eject it and generate jet propulsion.

Using an evolutionary algorithm, the team found the optimal combination of silicone mantle that “would, with only one small motor and a few simple cables, send the octo-bot jetting through the water.” 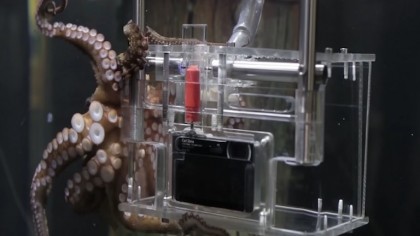 Scientists Just Taught an Octopus to Use a Camera

After tossing this PoseiDrone prototype in the Mediterranean, it fared successfully against the unpredictability of the ocean, making the entire ordeal a grand success.

Where is the Octo-bot now? In a tank in the Livorno aquarium in Italy, next to a real octopus.

Next up for octo-robotics, fashioning a synthetic form of cephalopod skin that can transform from a flat, 2D surface to a three-dimensional one with bumps and pits.