This One Inch Crack Totaled an Entire Corvette

One owner of a 2017 Grand Sport struggled with a suddenly devalued Corvette after a rock hit the underside of the chassis and caused irreparable (and tiny) damage.

When one hears the word "totaled" and "car" in the same sentence, they'd probably think of piles of wreckage and mangled parts. Having a car totaled is never a good experience for anyone, but it seemed even worse for one Corvette owner. The problem wasn't caused by a head-on collision or hitting a light pole; rather, the irreparable damage came from a one-inch slice in the body of the car. Everything else about the Corvette is pristine.

Someone by the name of cdm85-251 took to Corvette Forum and posted an unexpected reason for possibly having his 2017 Grand Sport Corvette totaled.

Here's what the user said:

"I had the misfortune of being on an extremely busy interstate about a month ago when a vehicle in front of me went over a large rock or chuck of something VERY hard. This interstate is eight lanes wide where I was at and vehicles were all around me doing 70+/- mph, so I had no where to go and I couldn't stop without causing accidents for others. I tried to straddle it, but it hit a number of places under the car, but luckily it missed anything with fluids. One big problem right now is the dealer has shown me pictures of a rear structural member that has a crack. They are calling it a rear transmission tunnel and indicating it is a non-serviceable part, not offered by Chevrolet. $7,600 damages without buying this part and the associated labor. Anyone have any similar experience?

I may end up with a totaled car that still looks perfect."

The 2017 Grand Sport models start at a market retail value of $65,450. A one-inch accident caused by fate and her sick sense of humor decimated the value on this car.

But why total it when you can barely see the issue? That's the issue for cdm85-521. His insurance company refused to believe that one inch of damage was irreparable. However, the dealer told him that the frame could neither be repaired by them or by Chevrolet. Thus began a back-and-forth between the insurance company, Chevrolet, and other options. Insurance suggested welding or replacement of the body, cdm85-521 told Jalopnik, but those options compromise the 'Vette's integrity.

After what must have been a massive headache for any Corvette owner, the insurance company finally declared the car a total loss. They assessed a fair value for a car that externally looks perfect.

This 2017 Corvette Grand Sport will go up for a salvage auction in Iowa. The estimated repair costs come in at just under $8,000 USD. However, it'll be interesting to see who will actually buy this costmetically-perfect car. 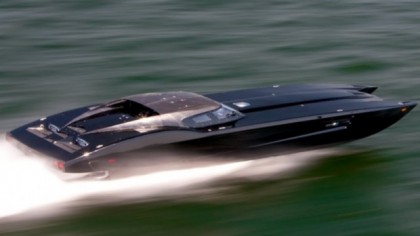 Ever wanted to drive a Corvette on water? You need to check this out!

The only possible (and complete shot in the dark) option this user had would've been to load up the car on a truck bed (lest he risk driving it) and taking it hundreds of miles away to the Corvette plant in Bowling Green, Kentucky. The Mecca for Corvette owners managed to work miracles on their own collection of Corvettes after a sinkhole swallowed eight of their most valuable cars in 2014. No idea whether they could've done anything for cdm85-521 in this situation. Given that he walked away with a 2018 Corvette Grand Sport, we think he found the best in a very frustrating situation.