Jim Beam have released a video of their latest product, a bourbon decanter that can pour drinks and answer questions.

Whiskey Maker Jim Beam enjoys poking fun at the latest tech trends. Last year they released a ‘Jim Beam Apple Watch’ that featured no actual way to tell the time but instead was a wearable shot glass. This year they have upped the ante by creating ‘Jim’ a home personal assistant to rival Amazon's Alexa and Google's Home. Although 'Jim' seems to be only good at one thing; pouring drinks.

In a video released by the company to promote the new product Jim is described as a ‘breakthrough smart decanter’ that is equipped with ‘unique intelligence that answers some of life’s most pressing questions’.

While the video does demonstrate Jim’s ability to speak, it won’t provide you with contextual answers instead it will offer you some recordings of the voice of Fred Noe, a master distiller at Jim Beam, most of them encouraging you to have a drink of Jim Beam. Which is easy to do with the 'Jim' in your house, because the device can pour you a drink simply by asking it to. Although if you do end up getting your hand on the device or find one in your Christmas stocking you'll want to show it off pretty fast. 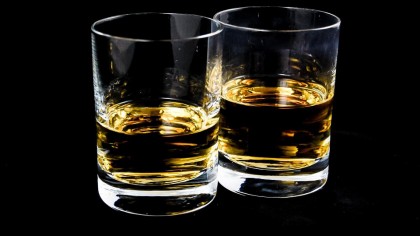 The product notes carefully state the integrated 3G service necessary for the for voice recognition, will expire about six months after purchase. So buy this product knowing it's just a really fancy looking decanter. Sold under the ‘ManCave’ section of the Jim Beam online store, the product is temporarily unavailable for purchase but they also promise any pre-orders will be shipped December 15.

It isn't clear if Jim is just a marketing stunt or an actual device, but either way, it's always fun to see one company taking a poke at another company's products. Some of the funniest ads ever made have gone down a similar road. Who could forget the ad for the Samsung S5 that kicked off the term, ‘wallhugger’ to describe Apple users who need to constantly recharge their batteries? The ad shows a montage of scenes in airports and waiting areas, with Apple users crowded around the public wall outlets trying to charge their devices, while Samsung users socialize and stroll around in ‘ultra power saving mode’. The ad cleverly taps into one of the biggest pain points of smartphone users and really shows the differences between the two main phone options of the time.

Audi takes a shot at Tesla and Musk

Not even Tesla is immune from rivals throwing some shade. Audi teased Tesla earlier this year unveiling a billboard featuring their yet to be released all electric e-Tron Sportback, with the words “Musk Have” underneath. Audi was a little premature in their campaign as the e-Tron isn’t destined for production until 2019 but the company’s attempt to wrench some of the spotlight from Tesla might have felt necessary with the way the Elon Musk-led company dominate headlines.

Via: Jim Beam, The Verge