This Photographer Sets His Work in the Star Wars Universe

Jan O’Field is a photographer with a passion for Star Wars. He creates images that blend realism and fantasy with impeccable results.

The talented artist uses images he has snapped on his travels through Europe in combination with photo editing skills to add in characters from the iconic franchise. Jan says he has been a huge fan of Star War ever since his Dad introduced it to him.

The images show regular humans in beautiful natural landscapes with just a hint of a Star Wars setting in the background. Like the great image of a person sitting in a frozen lake looking towards the mountains with the Star Destroyer just hovering on the horizon.

There is a host of your favorite characters featured. Follow O’Field on Instagram to keep track of his latest creations.

Star Wars fans are up there among the most dedicated and well organised. There are thousands of fan groups and community organisations that meet either IRL or online to discuss the pros and cons of the Star Wars franchise. 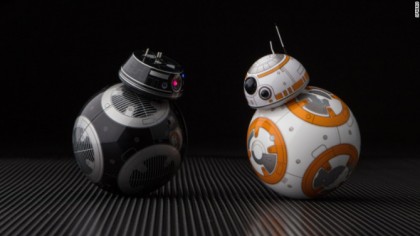 This New Droid Has Star Wars Fans Freaking Out

These groups have impressive names like The Dark Alliance, The Dark Empire or the Jedi Assembly. Groups have differing priorities and focus with some dedicated to the old school films other creating spin-offs of their own in the form of fan fiction, graphic novel and even animations. Each year many of these meet at different conventions, either dedicated Star Wars meetups or at any of the popular comic con events. Fans go to elaborate length to create accurate costumes of their favourite characters. Some even building real robots to truly capture the essence of their favourite character.

The first Star Wars Franchise, created by George Lucas, kicked off in 1977 with the release of the film Star Wars. This film was later called Episode IV: A New Hope after prequel films were released. The hugely successful Star Wars film was followed by The Empire Strikes Back in 1980 and Return of the Jedi in 1983. The three films are now widely acknowledged to form the Star Wars trilogy.

Three more films were added between 1999 and 2005. These prequel films didn’t receive the same rave reviews at the original trilogy but are still revered among die-hard fans. Another trilogy began with the release of Star Wars: The Force Awakens in 2015. The next film, Star Wars: The Last Jedi, will be released on the 15th December 2017. The last film of this trilogy has been tipped to be released on December 20, 2019. The film has the unconfirmed title of Star Wars: Episode IX.

It has been reported that so far the Star Wars Franchise has grossed over $7.5 billion dollars. George Lucas, the original creator of the films, sold his production company, LucasFIlm to Disney fro 4/06 billion USD in 2012. Lucas was also the creator of the Indiana Jones Franchise.There have been four released Indiana Jones Films so far, with a fifth expected in 2020.

An engineer in Ukraine successfully set up his Starlink for emergencies